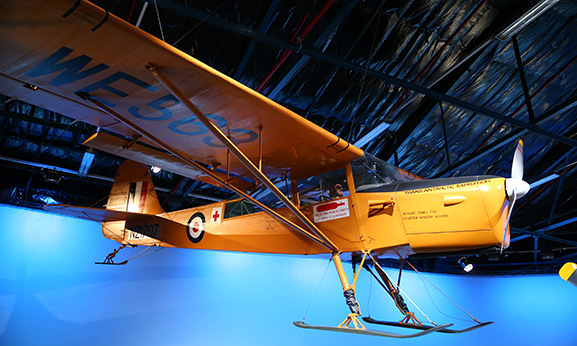 This aircraft was manufactured by Auster Aircraft Ltd at Rearsby, England, in November 1950 as a dual-control trainer for the Royal Air Force. It served in this capacity (possibly in the Middle East) before being allocated to the Commonwealth Trans-Antarctic Expedition in November 1955.

WE563 was purchased from the UK Air Ministry for the use of the NZ Antarctic Expedition, arriving in Lyttelton on 28 May 1956. It was left in the paint scheme it arrived in, except for the addition of the RNZAF serial number, ‘NZ1707’, on the rear fuselage. During cold weather training for the Expedition in 1956, the aircraft was damaged while landing on the Tasman Glacier and had to be hurriedly repaired before traveling to the Antarctic for the summer season. It had two tours of duty ‘on the ice’, the first from December 1956 - March 1958, and then from December 1959 - March 1961.

After returning to Wigram, NZ1707 was overhauled and put into service as a trainer at RNZAF Hobsonville in 1963. In 1965 it was transferred to No. 3 (Battlefield Support) Squadron RNZAF, before being eventually written off following a crash in the Kaipara Harbour in August 1966. Initially disposed of to the Museum of Transport and Technology (MOTAT) in Auckland, NZ1707 was later returned to the Air Force Museum at Wigram