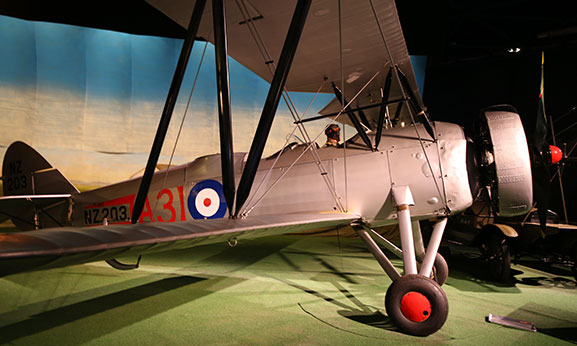 This aircraft is one of four Avro 626s originally purchased by the New Zealand Permanent Air Force (precursor to the RNZAF) as training aircraft in 1935. It arrived in Lyttelton in September 1935 and entered service with No. 1 Flying Training School at Wigram.

NZ203 was withdrawn from flying in 1943, converted to an instructional airframe (INST90) and issued to the Hastings Air Training Corps squadron. It remained there until being disposed of by the War Assets Realisation Board. It was purchased by Mr J Frogley and registered as ZK-APC in 1948. In 1965 the registration was cancelled (although it had not flown since 1958) and the aircraft put into storage at Havelock North.

NZ203 was purchased by the RNZAF Museum in 1980 and restored to flying condition at Ohakea, where its first post-restoration flight took place on 8 July 1985. The aircraft then moved to Wigram and formed part of the RNZAF Historic Flight until an engine malfunction grounded it. It has been on static display at the Museum ever since.