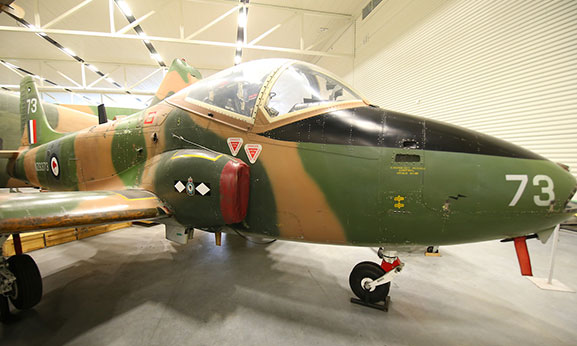 The RNZAF acquired 10 British Aircraft Corporation (BAC) Strikemaster aircraft in 1972 to replace the De Havilland Vampire. A further six Strikemasters were introduced into service in 1976. The Strikemaster was operated by No. 14 Squadron RNZAF, and used primarily as a jet conversion training aircraft for pilots progressing through to the McDonnell Douglas A-4 Skyhawk. From 1976, however, all RNZAF pilots completed training on this aircraft type, regardless of their later specialisation. The Strikemaster was withdrawn from service in 1992 and replaced by the Aermacchi MB339-CB.

The Museum has one other Strikemaster, NZ6374 (manufacturer’s no 344), which is currently on loan to the Warbirds and Wheels attraction at Wanaka Airport.