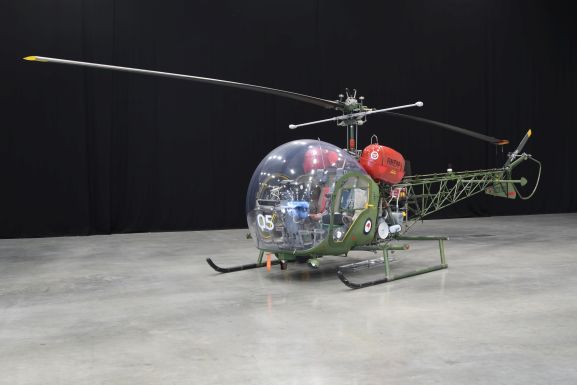 Perhaps best recognised as the helicopter that featured in the Korean War-based TV series ‘M*A*S*H’, the Sioux was the first rotary aircraft to enter military service in New Zealand.

The Bell 47 Sioux was developed in the United States in 1947 as a light utility/observation helicopter. Six Bell 47G-3B-1 aircraft were purchased in 1965, and allocated to No. 3 (Battlefield Support) Squadron at Hobsonville during December 1965 and January 1966. Seven Bell 47G-3B-2 aircraft followed in 1970.

The Sioux was used for light observation and liaison tasks for the Army, and was originally flown by both RNZAF and New Zealand Army Air Corps (NZAAC) pilots. Throughout its service life it was also the RNZAF’s primary helicopter training aircraft, and it has the dubious honour of having suffered the highest percentage of loss of any RNZAF aircraft in peacetime – eight were lost in accidents.

Up to five Sioux were attached to the Pilot Training Squadron (PTS) at Wigram from 1970. When PTS moved to Ohakea in 1993, the five Sioux were absorbed into No. 3 Squadron at Hobsonville, which took over the role of helicopter conversion training. No. 3 Squadron then relocated from Hobsonville to Ohakea in 2003, where the Sioux continued to operate until its retirement in 2012. Its role has now been taken over by the Agusta Westland A109.

The Museum’s Sioux, NZ3705, was shipped to New Zealand from the Bell factory at Fort Worth, Texas, by C-130 Hercules in December 1965. During its life it served at Wigram, Hobsonville and Ohakea.