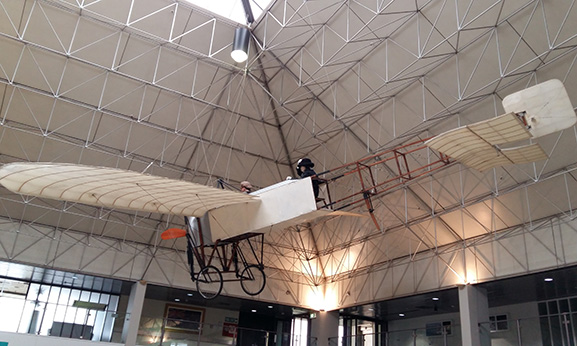 This aircraft is a replica of ‘Britannia’, New Zealand’s first military aircraft. The original ‘Britannia’ was presented to the New Zealand Government in 1913 by the Imperial Air Fleet Committee - a group of British businessmen with a vision of the potential of military aviation.

The first flight was not undertaken until January 1914, when Joe Hammond, a New Zealander and Second Lieutenant in the Royal Flying Corps, was engaged to demonstrate the machine. After several test flights from the Epsom Showgrounds, he was ready to take up his first passenger. Rather than select one of the many dignitaries present, he took aloft an actress, Miss Esme McLennan of the Royal Pantomime Company. Hammond was released from duty for his lapse in protocol, and the aircraft put into storage in New Zealand. The New Zealand Government offered it for service in World War One, and it returned to the UK in October 1914.

This replica was built by David Comrie at his home in Dunedin. While under construction, it was discovered that the aircraft being built was not the military version. Hurried changes were necessary to ensure the correct configuration, and finishing touches and fitting of the replica engine were undertaken at the Air Force Museum in time for its opening in 1987. The Bleriot is displayed as it would have looked on its exhibition flight, with Joe Hammond in the front and Esme McLennan as his passenger.

Where have the aircraft gone?

After hanging in the Atrium for over 30 years, the Bleriot replica has been taken down for a long overdue conservation inspection. This will also allow us to review how the Atrium space might be refreshed as part of the Museum’s programme of continuous improvement. In the meantime, you’ll be able to view them from a whole new perspective on our free Behind the Scenes tours!

This is all part of a series of changes that you will notice over the near future, as we embark on a process of reimagining our spaces and the way we tell the stories of our Air Force.