On display in the Reserve Collection 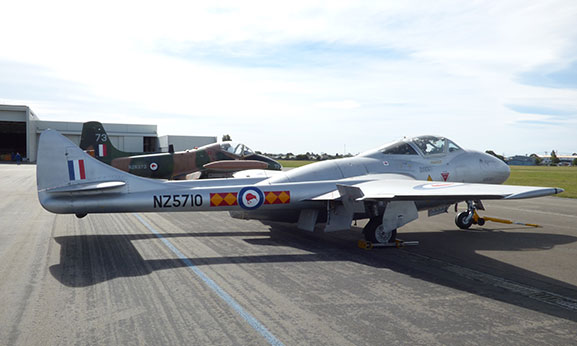 The RNZAF originally purchased 18 FB.5 single-seater Vampires in 1951 to equip No. 14 Squadron at Ohakea. Because of accidents, eight second-hand Vampires were procured in 1953 as attrition aircraft, with another 26 arriving in 1955-1956. The RNZAF deployed No. 14 Squadron to Cyprus in 1952 where they were equipped with loaned RAF Vampires. The Vampires left at Ohakea were then used to reform No. 75 Squadron. They served in a day fighter and ground attack role, and later as a jet conversion trainer within New Zealand until 1972, when they were replaced by the BAC Strikemaster.

NZ5710 was purchased in 1956 and assembled at Hobsonville. It served with Nos. 75 and 14 Squadron and the Jet Conversion Unit at Ohakea between 1956 and 1972. Placed into long term storage at Woodbourne in November 1972, it was converted to an instructional airframe (INST 205) at No. 4 Technical Training School in January 1973, before being transferred to the RNZAF Museum at Wigram in 1984.