Can be viewed in the Atrium. 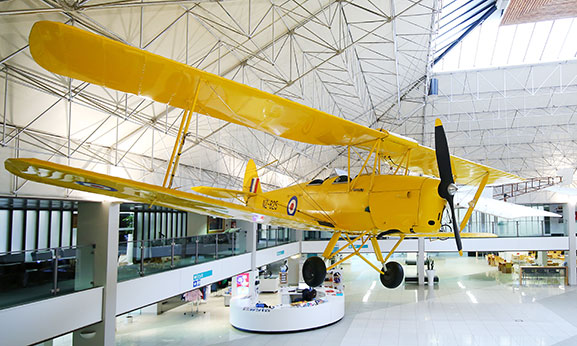 The RNZAF operated a total of 335 Tiger Moths from 1939 to 1956. They were used almost exclusively for basic flying training, and was the principal initial pilot trainer during World War Two. Typically, pilot trainees would spend 40-50 flying hours on Tiger Moths before moving on to other aircraft types. In the early post-War period, a small number of Tiger Moths were operated by the RNZAF in the central North Island in support of the Forest Service on fire patrols during the summer months.

NZ1481 was manufactured by the De Havilland Company of New Zealand at Rongotai in 1943-1944 and entered service with No. 2 Elementary Flying Training School at Ashburton on 25 January 1944. It was subsequently stored at Wigram before conversion to an instructional airframe (INST150) and allocated to No. 1 Technical Training School at Hobsonville. On 20 August 1965 the aircraft was passed to No. 12 Squadron Air Training Corps at Invercargill and recovered for display at the Museum in 1977. Rebuilt by a team of volunteers known as ‘the Moth Doctors’, the aircraft is displayed as NZ825.

Where have all the aircraft gone?

After hanging in the Atrium for over 30 years, the Tiger Moth has been taken down for a long overdue conservation inspection. This will also allow us to review how the Atrium space might be refreshed as part of the Museum’s programme of continuous improvement. In the meantime, you’ll be able to view them from a whole new perspective on our free Behind the Scenes tours!