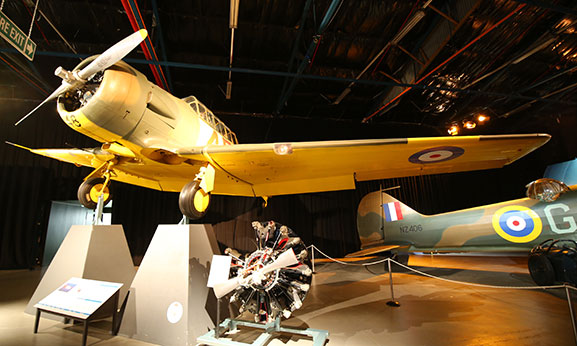 Manufactured in 1944 by North American Aviation in Dallas, Texas, NZ1087 was shipped to New Zealand at the expense of the British Government, under the Empire Air Training Scheme. It entered service on 5 July 1944, serving with No. 1 Service Flying Training School, Wigram, from 1944-45, and at Ohakea from 1950-57, before being allocated to long term storage.

On 4 October 1962 it returned to service at Wigram as a pool aircraft serving the Flying Training School (later Pilot Training Squadron) and Central Flying School, and was also used by the Red Checkers Aerobatic Team. After being withdrawn from service in June 1977, it was flown to RNZAF Base Woodbourne and allocated to No. 4 Technical Training School as an instructional airframe (INST 213), before returning to Wigram, and the Museum, in 1981.

It is displayed as Harvard Mk.II NZ948 of No. 2 Service Flying Training School, Woodbourne, 1943.