Home / 40 years of service – the military journey of Harry Leese 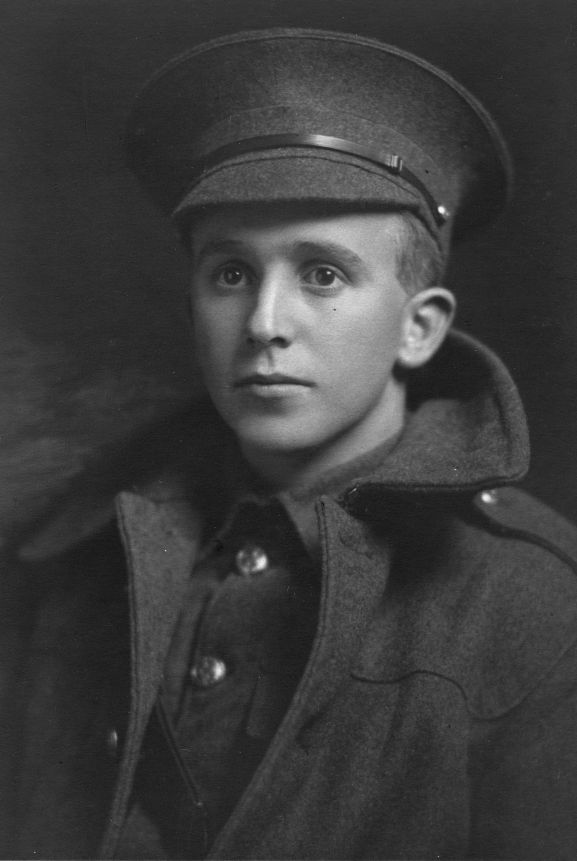 Portrait of Private Henry Clifford ‘Harry’ Leese taken in 1914 on enlisting in the New Zealand Army. From the collection of the Air Force of New Zealand.

As we approach the 101st commemoration of Armistice Day, we remember one veteran who served his country in not one, but two world wars.

Henry (Harry) Leese served in the New Zealand military forces in various capacities for some 40 years. He was born in Wellington on 14 June 1894, the only son of Mr and Mrs Clifford Leese.

Off to The Great War 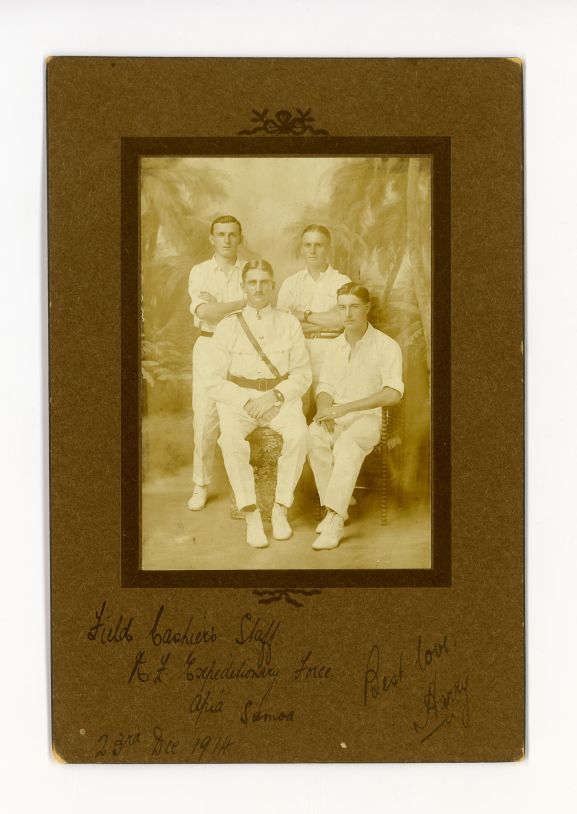 Harry Leese (back row, right) and other members of the Army Pay Corps at Apia, Samoa, December 1914. From the collection of the Air Force Museum of New Zealand.

After completing his basic education, Harry found employment at the National Bank of New Zealand as a clerk. When war broke out with Germany in 1914, he immediately volunteered and was, appropriately, posted to the New Zealand Army Pay Corps. He saw service in Samoa initially, then, Egypt. According to his New Zealand Expeditionary Force (NZEF) records, he later served with the Wellington Regiment in the UK and then on the Western Front with the 1st Battalion of Auckland Regiment, reaching the rank of Sergeant. In December 1916 he contracted laryngitis which affected him for two months and in the spring of 1917, he was detached for officer training. In June 1917, Harry Leese was discharged from the NZEF to take up a commission with the Royal Flying Corps (RFC).

Over the Western Front 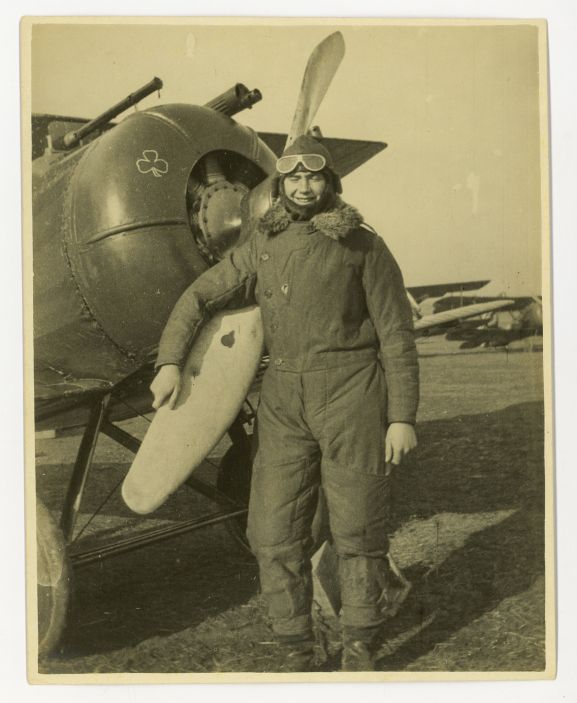 Harry Leese in flying suit, standing by the distinctive nose of an Airco DH-5 of No. 32 Squadron, c late 1917. From the collection of the Air Force Museum of New Zealand.

After just four months of flying training, Harry was posted to No. 32 Squadron RFC at Vert Galant in France on 4 October 1917. He was placed in “A” Flight, under the command of Captain S.P. Simpson. This fighter squadron was equipped with the somewhat unsuccessful Airco DH.5 scout, notable for its unusually backward staggered wings design.

Despite the type’s mediocre performance at altitude, Harry was involved in numerous scraps with the enemy, most of which proved indecisive. He was able to assist in bringing down a German aircraft on the afternoon of 13 November 1917. Shared with three other pilots, an enemy two-seater was sent down ‘out of control’ just south east of Houthoulst Forest as his sole combat success in the DH.5. 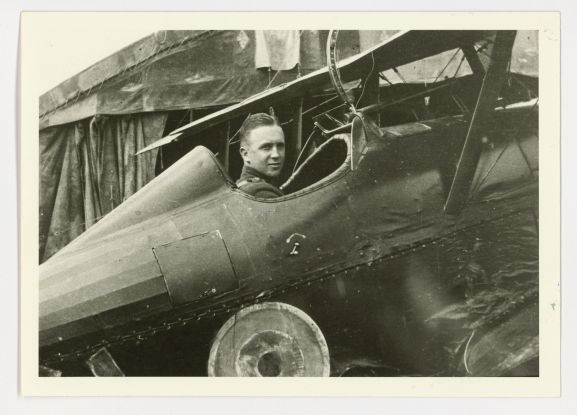 Harry Leese in the cockpit of a Royal Aircraft Factory SE.5a fighter of No. 32 Squadron RAF, c 1918. From the collection of the Air Force Museum of New Zealand.

In December 1917 the Squadron received its first examples of the excellent Royal Aircraft Factory SE.5a, the mount of many of the New Zealanders who became aces. Harry’s solo success on the SE.5a occurred on 8 May 1918, when he dived on a Pfalz D.III fighter during a general dogfight and according to his combat report:

“….fired 200 rounds into E.A. (Enemy Aircraft) at point blank range. E.A. came out of dive and fell like a leaf, afterwards at about 4000 feet fell in an irregular spin and was last seen in this condition at 1000 feet.”

In contrast, on the negative but slightly humorous side, Harry had smashed up a brand-new SE.5a in a crash at St Omer after collecting it for delivery to the Squadron. His great friend at the Squadron, Canadian Homer Proctor did the same on 16 March 1918, and graced Harry’s autograph book with an appropriate cartoon a few days later! 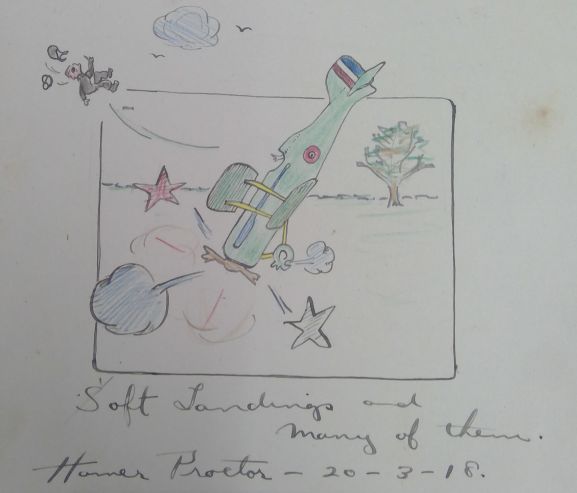 Cartoon by Lt Homer Proctor from Harry Leese’s autograph book, 1918. From the collection of the Air Force Museum of New Zealand.

After a couple of weeks’ leave in May 1918, Harry returned to the UK to ‘Home Establishment’ in June 1918 after a period of just over six months flying at the Front. He served at No. 2 Fighting School for a time before being sent to an ‘experimental squadron’ based at Northolt. After a spell in hospital and at the Armament School Uxbridge, he was repatriated to New Zealand in August 1919. 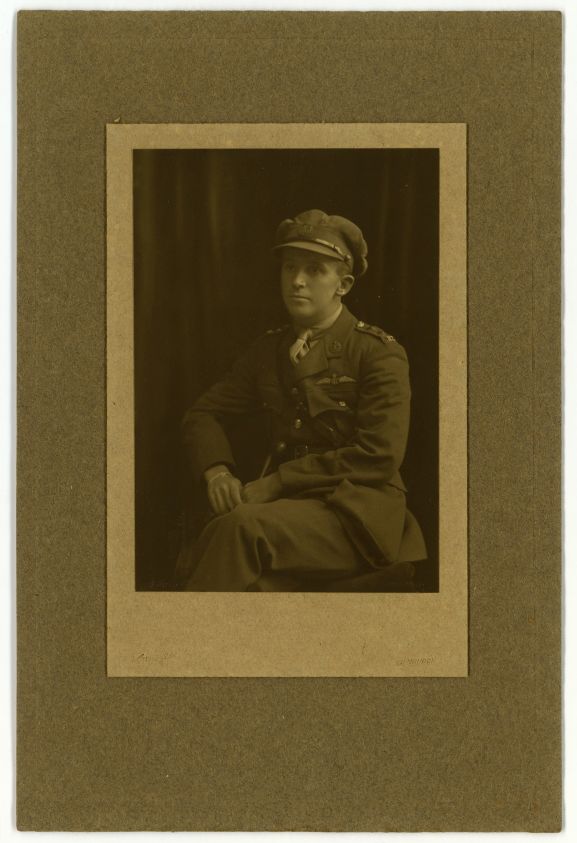 Harry returned to the world of banking with the Bank of New Zealand on his demobilisation in 1919 and became well known in golfing circles, representing Wellington Golf Club in competitions. But in 1923, as an experienced military pilot, he was commissioned into the newly-created New Zealand Air Force (NZAF), a territorial force which trained through annual refresher courses at Wigram. He remained in the NZAF during the inter-war period up to the foundation of the modern RNZAF in 1937. 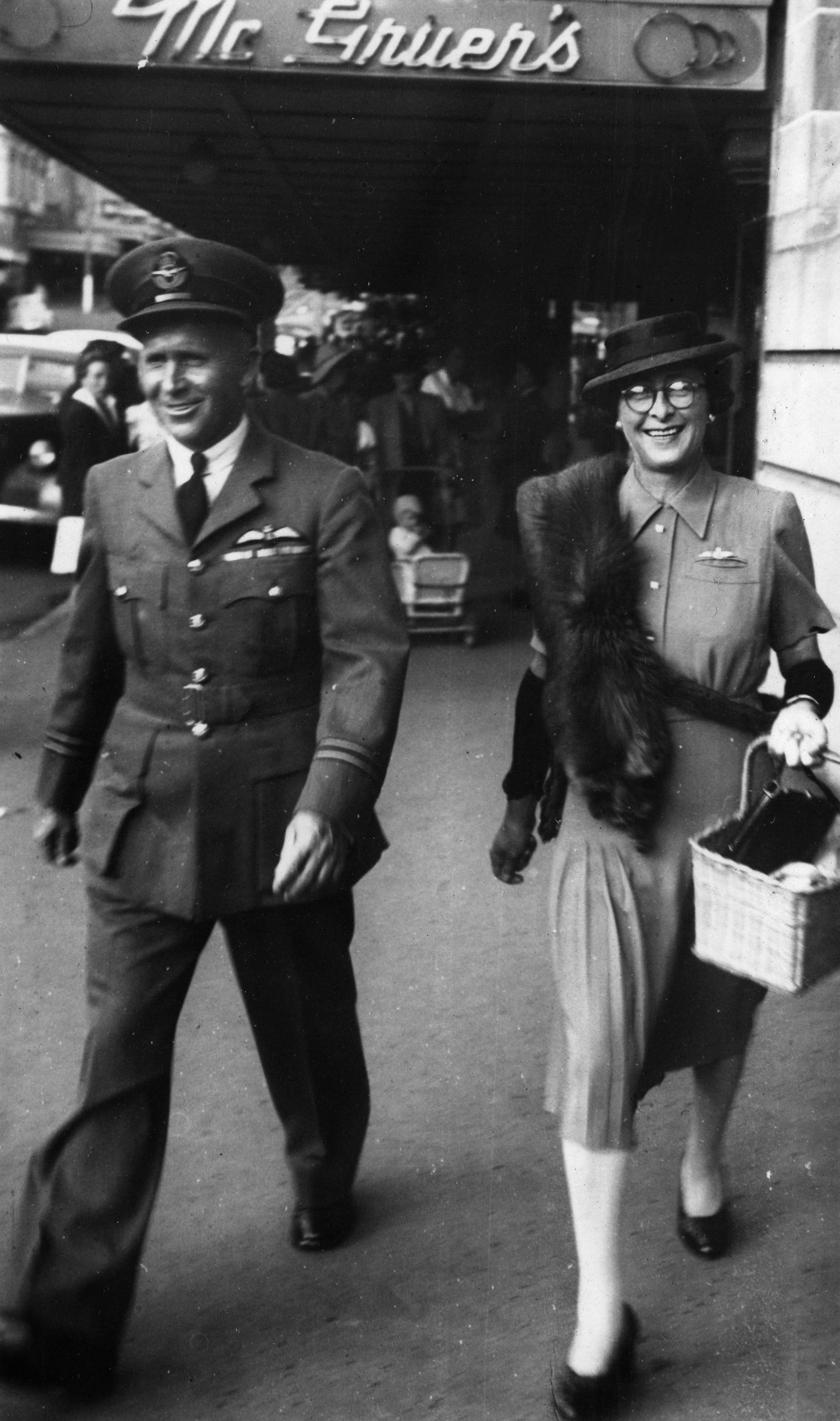 Harry Leese and his wife May, walking down the street in New Plymouth during World War Two. From the collection of the Air Force Museum of New Zealand.

Another very important event in his life at this time was his marriage to Frances May Lowe (known as May) in 1928.

Harry was also active with other New Zealand veterans in a group which was set up called the ‘War Birds’ in 1935. This was a group of around 30 ex-Royal Flying Corps and Royal Naval Air Service pilots, who met for a commemorative dinner in June 1935. Presided over by the renowned New Zealand ace, Keith (Grid) Caldwell, Harry was elected to the organising committee for future dinners. 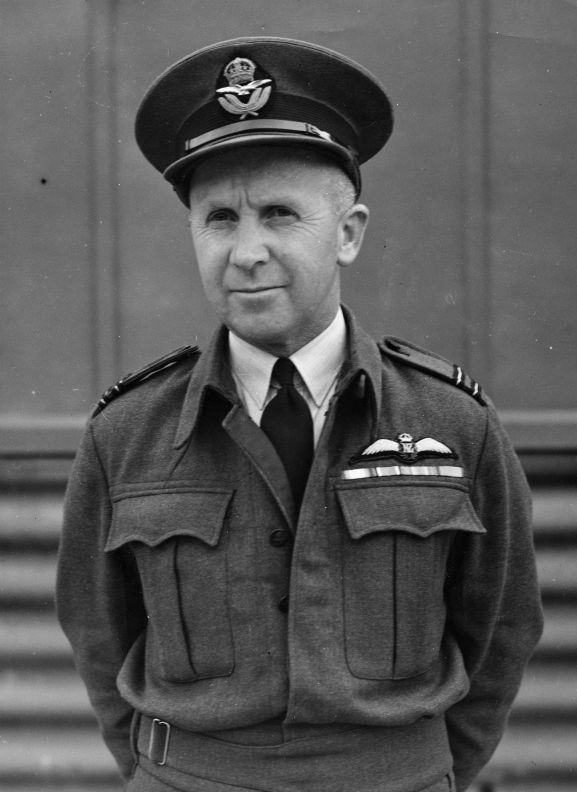 Flight Lieutenant Harry Leese, adjutant, RNZAF Bell Block, 1942. From the collection of the Air Force of Museum of New Zealand.

Harry remained a member of the RNZAF Reserve and on the outbreak of World War Two on 4 September 1939, he was available for service again with the rank of Flying Officer. Like many other veterans of the First World War, Harry saw service once again, although this time in not quite such an active role. For three weeks in June 1940, he attended refresher training in core military skills at Levin in preparation for this.

In August 1940, like many other older veterans of the last war, Harry was made an Administrative and Special Duties Branch officer. After a couple more weeks at Wigram, he was appointed Station Adjutant at Blenheim (Woodbourne). His duties were to control the administration and smooth running of the station and to report and record events occurring there. In May 1941, he was posted to the School of Navigation at Bell Block, New Plymouth, in the same role.

In September 1943, a possible posting to the Pacific Islands fell through and Harry went to RNZAF Station Nelson instead. Here he completed his RNZAF service in November 1944 by returning to the Reserve, as the training system in New Zealand began to wind down.

Harry returned to his life in banking, becoming New Zealand manager for BNZ’s travel branch. He lived in Milford, Auckland and retired to the North Shore with his wife May. They had no children and their later years were spent in the Lady Allum Home, where they became popular residents. He also became the oldest surviving member of the North Shore Brevet Club. 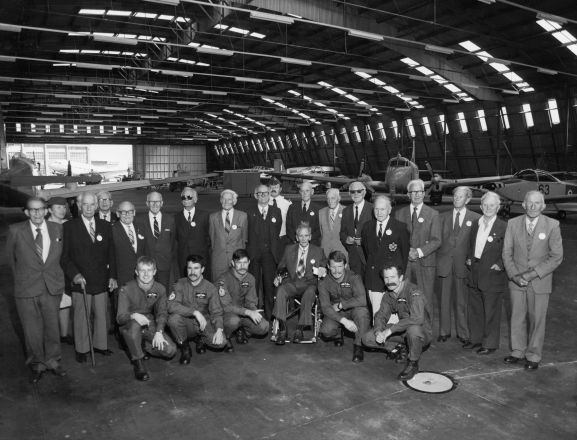 Group of World War One airmen at the 1981 Reunion held at Wigram. Harry Leese is standing fifth from the right in the blazer with a badge. Image ref: 2019/064.19a ©RNZAF Official

Harry maintained his links with the other veterans of World War One during his later life. In 1960, the 1914-18 (NZ) Airmen’s Association was formed and met annually at locations round the country. Harry joined and attended the 1965 Reunion in Palmerston North. He remained a member until the Association formally wound up in 1974. His last known reunion attendance as a World War One veteran was in September 1981, when a few surviving veterans were entertained at RNZAF Base Wigram at a dinner held by the Chief of Air Staff. He also donated some of his World War One photographs to the growing RNZAF Heritage Centre (later, RNZAF Museum) collection during this visit.

Ka maumahara tonu tātou ki a rātou. (We will remember them).