This is the story of two New Zealanders and one epic battle they fought alongside Australian pilots in true ANZAC spirit. In 1950, the Cold War heated up when conflict between North and South Korea brought the United Nations (UN) into the struggle. China later joined the war in support of the faltering North Koreans. The Royal New Zealand Air Force (RNZAF) did not deploy combat aircraft to Korea as part of its UN contribution but it is often forgotten that several New Zealanders flew operationally with other air forces, most notably the Royal Australian Air force (RAAF) and British Fleet Air Arm (FAA). No. 77 Squadron RAAF was deployed to the war zone as a fighter squadron, operating the American P-51D Mustang, chiefly in the ground attack role. 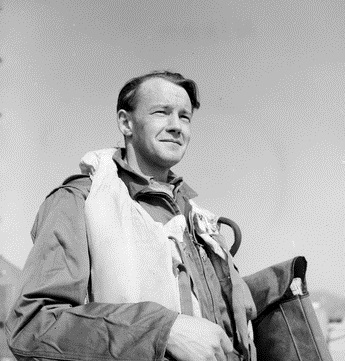 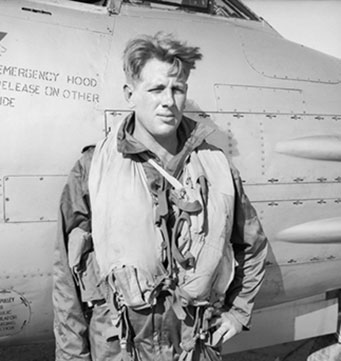 Flight Lieutenant Max Scannell of Christchurch, joined the RNZAF in 1942 and completed three operational tours flying fighters in the Pacific with Nos. 18 and 14 Squadrons. After the War he left the RNZAF, but not before he got the chance to fly the only jet aircraft in New Zealand, Gloster Meteor NZ6001, whilst it was at Ardmore and Ohakea in 1946. He joined the Royal Air Force (RAF) in 1947 and joined No. 257 Squadron flying Meteor F.4 fighters. Max gained an exceptional reputation as an aerobatic pilot, representing the RAF in international competitions. During 1951 No. 77 Squadron RAAF was to convert its ageing Mustangs in Korea to the newer Gloster Meteor jets. Max, along with three other British pilots, were sent to Japan to train the Australian pilots on the latest version of the Meteor, the F.8. The Meteor was the first jet fighter to serve with the RAF. It saw service in the last weeks of World War Two in Europe, and became the RAF’s mainstay fighter in the immediate post-war period. Scannell and his RAF colleagues arrived in Japan in February 1951 and were able to participate in some of the last Mustang sorties over Korea during the period they trained their Australian colleagues on the new Meteors. One of Max’s contemporaries at No. 77 squadron was a fellow Kiwi, was Sergeant Vance Drummond of Hamilton. Vance had also joined the RNZAF during World War Two and was a trainee navigator when the war with Japan ended. He later served with the New Zealand Army before moving to Australia and joining the RAAF as a pilot in 1949. 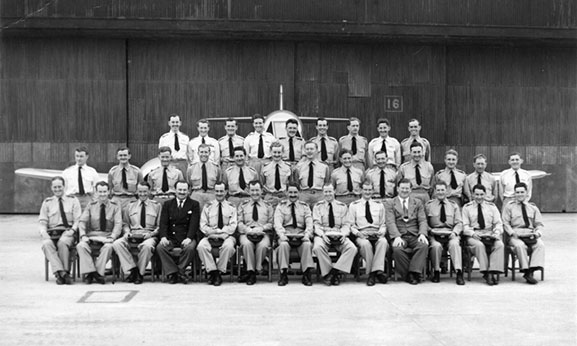 A formal group portrait of 77 Squadron RAAF pilots taken in front of one of the Squadron’s new Meteor F.8 jet aircraft at Iwakuni, Japan, April 1951. This marked the commencement of their conversion from the P-51D Mustang to its replacement. Max Scannell is on front row, third from the left.

Scannell’s log book records that on several occasions during the year enemy MiG-15 jet fighters were sighted, but 1st December 1951 marked a turning point for the squadron in Korea. 14 RAAF Meteors ventured into enemy territory near Sunchon, Max Scannell and Vance Drummond among them.  A large group of MiG-15s attacked the Meteors, varying in estimates from 30 to 50, according to Scannell. This confusion was also reflected in the ensuing dogfight, with groups of aircraft twisting and turning for advantage over a wide area.  The result became a series of individual duels. Australian, Flying Officer Bruce Gogerly was able to fire a five second burst into a lone MiG which crashed in flames, becoming Australia’s first jet vs jet kill. Another MiG-15 was fired on by several pilots (including Max Scannell) and was also destroyed. It was deemed to be a Squadron victory. This made Max the first New Zealander to contribute to a jet vs jet kill.  Despite these successes, the fight ultimately went against the outclassed and outnumbered Meteors. Flight Sergeant Don Armitt was shot down and was listed missing, believed killed. Flying Officer Bruce Thompson’s aircraft was damaged and he was forced to eject. During the confusion, Pilot officer Vance Drummond was also hit and ejected from his aircraft. He, like Thompson, was captured by North Korean forces and imprisoned. 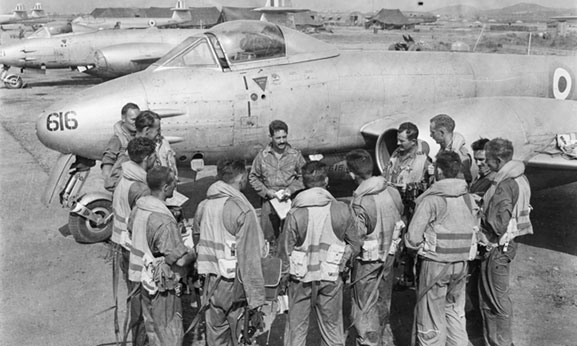 Pilots of No.77 Squadron  RAAF, being briefed by their Commanding Officer, Squadron Leader Dick Cresswell (centre, facing camera), on the Kimpo airfield tarmac in front of a Meteor aircraft, prior to a mission over North Korea in 1951. Flight Lieutenant Max Scannell, RAF is second  from the left in the semicircle.

The furious combat on the 1st December 1951 painfully illustrated the shortcomings of the older Meteor design in air combat against the new, fast and agile, swept-wing MiG-15. This led the Australian pilots to lament these shortcomings in a December 1951 verse which began “All I want for Christmas is my wings swept back…” The ‘Battle of Sunchon’ (as it was dubbed) also marked the end of the Korean adventure for Max Scannell. Later that day he flew in search of the missing pilots, his last act with the Squadron. After a period of leave in his native New Zealand, he returned to Britain and flying duties. Commanding squadrons in both Britain and West Germany, he eventually reached the rank of Air Commodore and retired in 1978. He died in 1985 with his collection being donated to the Air Force Museum of New Zealand shortly after. Vance Drummond survived his dreadful period of nearly two years of captivity in North Korea, and was released in September 1953. He continued his RAAF career, commanding the Black Diamonds aerobatic display team and also saw service in Vietnam. He reached the rank of Wing Commander but sadly he was killed while commanding No. 3 Squadron, RAAF, in a flying accident in 1967.

items from our collection 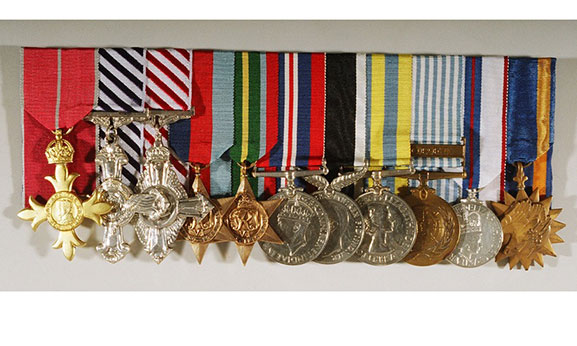 Medal group of Air Commodore Maxwell Scannell. Third and fourth from the right are the United Nations Korea Medal and  the Korea Medal, both awarded for his service with No. 77 Squadron RAAF in 1951. 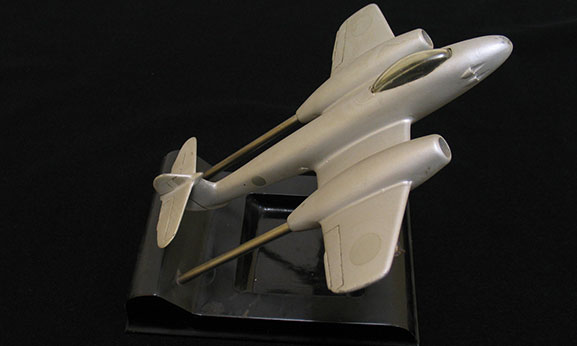