With the Rugby World Cup in full swing, we thought it would be a great opportunity to trace the story of New Zealand’s national game in the Royal New Zealand Air Force (RNZAF). Team sports have always been considered vital for morale, training and fitness in the armed forces and the Air Force is no exception. The RNZAF has attracted some remarkable players, some of whom have made the ultimate sacrifice in the service of their country. 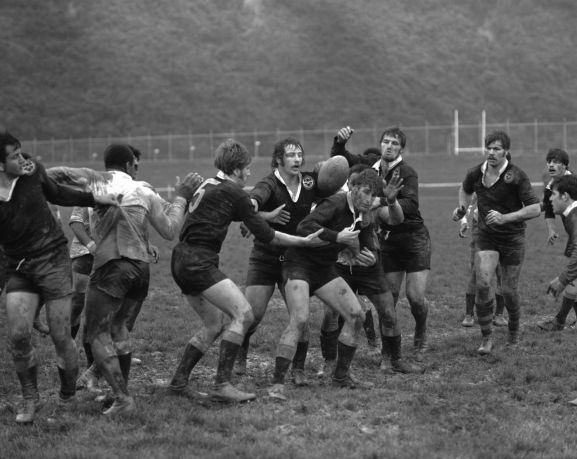 A few New Zealanders participated individually in rugby matches with the British Royal Flying Corps, Royal Naval Air Service and Royal Air Force in World War One. In a letter home in 1917, Cadet Stuart Richardson of Dunedin, described his first taste of the game at No. 6 School of Military Aeronautics, Denham:

‘I had my first game of Rugby football this afternoon. I played to take the place of one of the team who was absent and didn’t do so badly considering I knew none of the rules of the game, which are exceedingly intricate’.

Richardson himself was shot down and killed just six weeks before the Armistice in 1918.

Following the end of World War One and with the return of experienced New Zealand airmen from the War, it was decided to form a small air contingent, the New Zealand Permanent Air Force (NZPAF), in 1923. Pilots did brief refresher courses annually and there was a small core of full-time officers and ground crew. The NZPAF had its base at the newly purchased aerodrome at Sockburn (later renamed Wigram) where the Air Force Museum of New Zealand stands today.

It is probable that very few official Air Force matches were played during this period due to the part-time nature of many of the personnel. However, the creation of an air station at Hobsonville in the late 1920s, (albeit with a very small number of personnel) resulted in some rugby. An Air Force team participated in the Kohn Cup in 1935, playing against the Army, Navy and Police. The following year the Air Force won the Cup, before losing it in 1937 to the Police.

The RNZAF is formed

The formation of the RNZAF in 1937 provided the stimulus for the game of rugby in the Air Force. Several large new stations were planned and built, at Whenuapai, Ohakea and Woodbourne, and increased recruitment ensured a greater supply of players. Sports grounds were an integral part of the huge sums of money being spent on new Air Force stations in the late 1930s; at Hobsonville, nearly £2,500 (over $260,000 today) was spent on sports facilities in 1937.

At the fully-established station of Wigram, 1938 saw the first season that the RNZAF team there competed in the local rugby competition. Managed by a civilian Education Officer, James Mackay (who had played twice for the All Blacks in 1928), the team had a creditable first season, scoring 109 points for and conceding 87 points. They lost their first match but then went on a winning streak of five in a row, eventually winning 50% of their fourteen games that year. Eight players of all grades were selected for Canterbury that year, including the captain of RNZAF Wigram, F.L. Pearson. Teams were also formed at other RNZAF stations and began to play in local competitions.

The outbreak of world War Two on 3 September 1939 saw RNZAF personnel sent all over the world and offered new opportunities to play rugby.

The harsh conditions of the Pacific Islands and Japanese air attacks meant that the opportunities for playing rugby were more limited than some other theatres. A few games were played by units, sometimes against Australian units but sports more suitable to the conditions (and popular with the Americans) such as softball and volleyball proved popular.

Away from the immediate fighting, in places like Fiji and Norfolk Island, rugby was extensively played. An RNZAF team played in the local Fijian competition and a league had been created on Norfolk Island by 1945, the RNZAF fielding a team.

Just as World War One had curtailed the lives and careers of some of the great New Zealand footballers serving in the New Zealand Army, World War Two took its toll of New Zealand airmen too. A number of the RNZAF side which played in Britain during the war lost their lives. Flight Lieutenant Eric Cox DFC of Hawke’s Bay was killed over Crete in October 1942. Another Hawke’s Bay player, Flight Sergeant Tamaturanga Te Rakai-a-Hawea Tomoana was killed in June 1943. Charles Saundercock of Canterbury was injured in 1942 and returned to duty before being reported missing in May 1943. These are just a few of the personnel lost to the RNZAF and New Zealand Rugby.

Not all rugby players were killed serving with the RNZAF. A notable loss was former All Black Pilot Officer Donald Cobden, of Canterbury, while serving with the Royal Air Force during the Battle of Britain. He was shot down into the English Channel and killed on 11 August 1940.

Rugby remains a major part of sport in the RNZAF, played at a number of levels for both the men and women’s game.

Following World War Two, the main development in RNZAF rugby was the establishment of the annual Isitt Cup inter-base competition in 1948. Named after former Chief of Air Staff Air Vice-Marshal Sir Leonard Isitt, who donated the original trophy, the Cup has been vigorously contested every year since (except during the Waterfront dispute of 1951). The Isitt Cup remains the chief RNZAF competition. 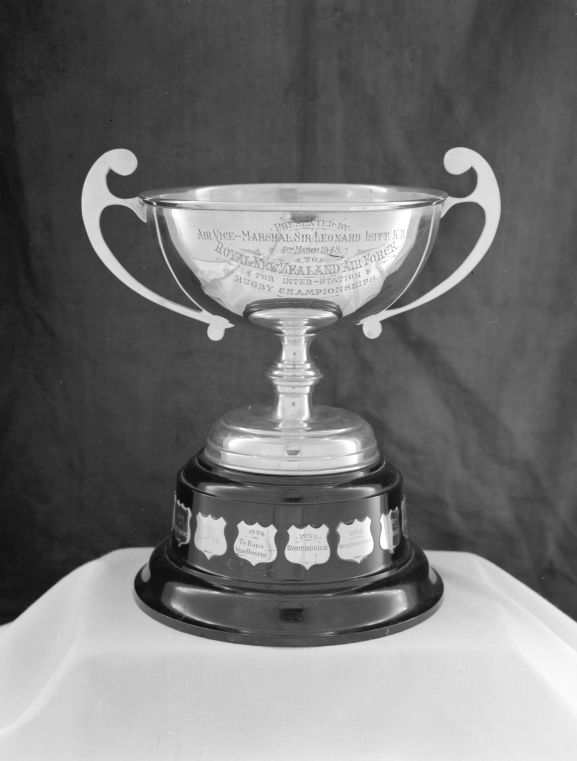 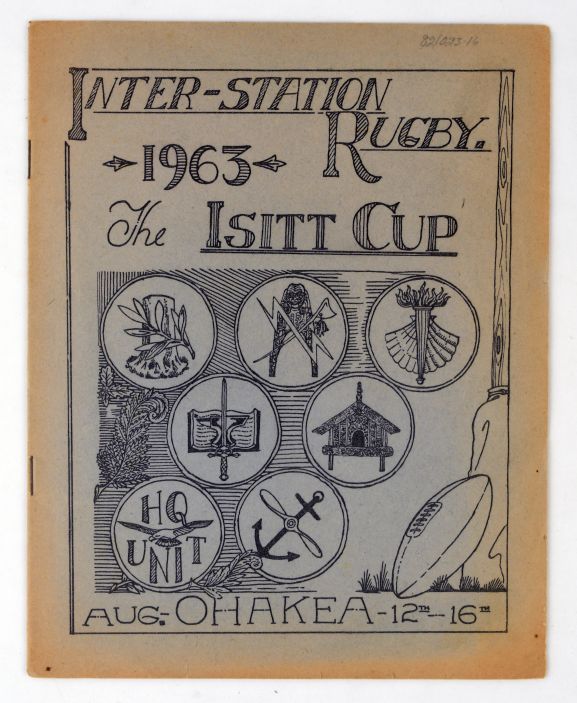 Programme for the Isitt Cup rugby competition, held at RNZAF Ohakea in August 1963. From the collection of the Air Force Museum of New Zealand.

Other cups have been awarded at Base level, often commemorating former players or personnel, or simply played for the excuse to play rugby. Historically, matches have been played on RNZAF stations between various groups, such as Officers vs Non-Commissioned Officers or Airmen. Other informal local matches have also been played, such as a Māori vs Pakeha Junior Ranks Club Rugby Shield played for at RNZAF Te Rapa in September 1968. 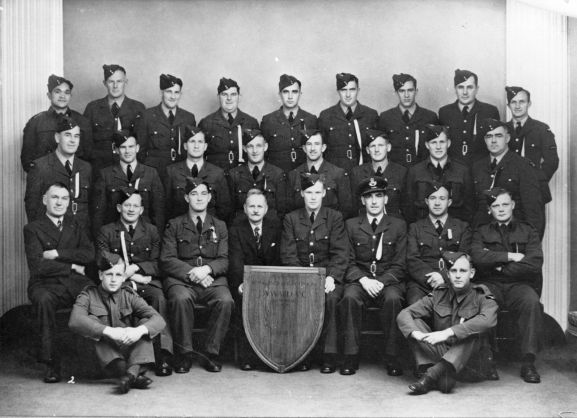 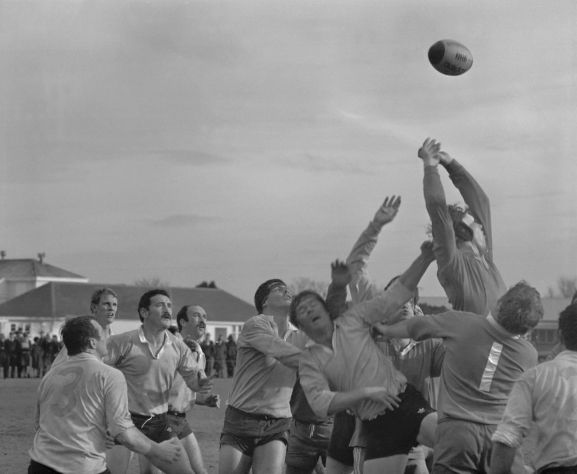 Final of the Isitt Cup rugby competition, between Auckland and Wigram, at RNZAF Base Wigram. Wigram won. Circa 1981. Image ref: WgG871-27~81 ©RNZAF Official

A more recent development is the Burn-Merz Shield, played for since 2004 between the Royal New Zealand Air Force and Royal Australian Air Force. It commemorates the joint sacrifice of Lieutenants William Burn of Christchurch and George Merz of Prahan, Victoria, who died together in Mesopotamia (Iraq) on 30 July 1915, becoming the first airmen from Australia and New Zealand to lose their lives on active service. Thus far, the RNZAF has had the better of the contests, retaining the Shield from 2004 -2008, before the RAAF finally won it for the first time in 2009. The RNZAF held the Shield in 2018. 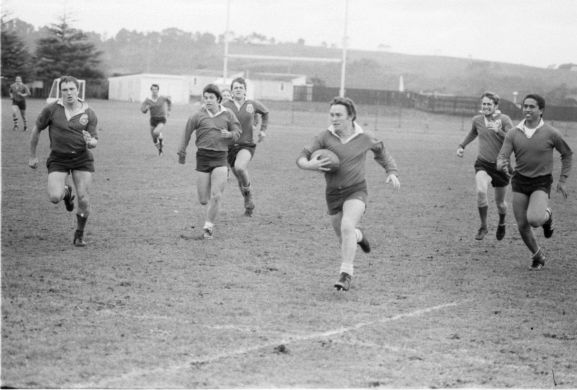 Rugby match between RNZAF Base Auckland and crew members from HMS Achilles at RNZAF Base Whenuapai. Circa 1979. Image ref: WhG1418-13~79 ©RNZAF Official 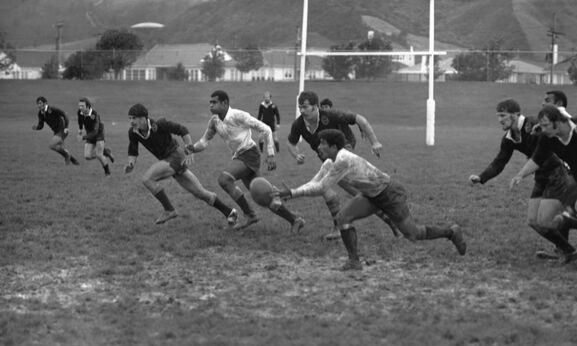 The following are a few of the famous players who have served in the RNZAF and also achieved honours with New Zealand or Māori teams:

A prolific try scorer, winger Phil Clark played for Wigram and then Combined Services before playing for Marlborough, 1965-1968.   He played four All Black matches during the tour of Britain and France in 1967 but injury hampered his play. His older brother, Adrian was an All Black first five.

Ron Rangi was born in Auckland and first represented the RNZAF in 1961. He subsequently played for Auckland and with the Māori, touring Fiji in 1964. He went on to play a total of 10 Tests for the All Blacks between 1964 and 1966, earning a reputation as a hard-tackling centre.

Rex Orr of Gore was an RNZAF officer and a leading figure in services rugby in the 1950s. Due to his postings he represented Wigram, Hobsonville and the RNZAF, as well as Auckland and Ponsonby. In 1949 he won his sole cap as full-back for the All Blacks against Australia.

Morrie Goddard of Timaru originally joined the Army before transferring to the RNZAF. Posted to the European theatre of war during World War Two, he represented England twice in service internationals and the New Zealand Services while there. Post-war, Goddard made five appearances for the All Blacks between 1946 and 1949, scoring 27 points. He played for South Canterbury until 1954. He died in 1974 in Christchurch.

‘Jack’ Macdonald was an all-round sportsman of great prowess. In 1926-7 he toured with the Māori team touring Britain and Canada and also played for Māori in 1931 and 1934-5. He represented New Zealand at the 1930 Empire Games and won a gold medal at the 1932 Olympic Games. Moving to England to play league, he joined the RAF during World War Two and participated in several representative matches. He even represented England in a service international against Wales in 1942. Macdonald later transferred to the RNZAF. He retired from rugby union in 1945 and died at his home in Picton on 31 December 1982. Former All Black and Crusaders full-back Leon Macdonald shares the same whanau.