Home / The arrival of the Southern Cross at Wigram

Until 1928, only two overseas flights had arrived in Australia and none at all in New Zealand. That changed when Charles Kingsford Smith and his crew of the aircraft Southern Cross landed at Wigram on 10 September 1928. Our guest blogger, Brian Lockstone of the Aviation Historical Society of New Zealand, explores the story behind this remarkable history-making event. 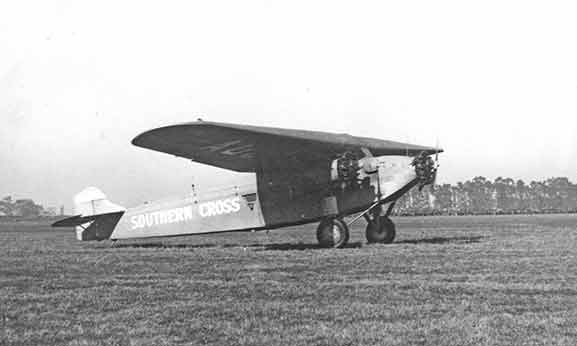 Southern Cross on arrival, 11 September 1928. The registration marks G-AUSU are visible under the mainplanes although the United States’ marks 1985 are still on the fin/rudder. From the collection of Air Force Museum of New Zealand.

Out of a fine spring morning on 11 September 1928, the Fokker F.VII/3m Southern Cross accompanied by four Bristol F2B Fighters from the New Zealand Permanent Air Force, roared over Christchurch to land at Wigram after a 14-hour 25-minute flight from Richmond, Australia, having just completed the first aerial crossing of the Tasman Sea.

Christchurch saw unprecedented scenes of jubilation. Crowds had started assembling at the aerodrome since 7.30am alerted by radio reports of the ‘Cross circling over Wellington before heading south. By 9.00am more than 30,000 were waiting.

The four Bristol Fighters met the Fokker over Amberley, an hour north of the city, and escorted it in. They were led by Captain Maurice Buckley in 6857 carrying cameraman Frank McKechnie, of the government Publicity Department. 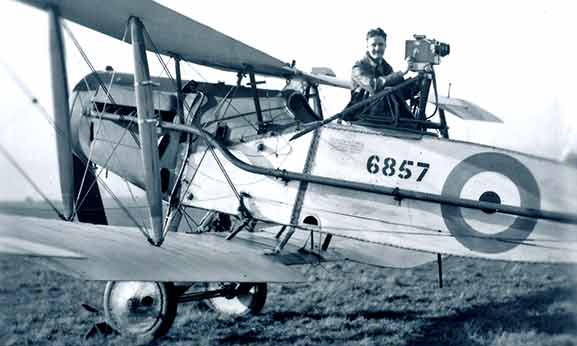 Bristol F2B 6857 with cameraman Frank McKechnie. He filmed the arrival of the Southern Cross. From the Alexander Turnbull Library collection.

Perched above the gunner’s station, with his camera’s tripod lashed to the fuselage, he filmed the event.

The exposed film was driven to Lyttelton. McKechnie took it on the overnight ferry to Wellington and the government studios where it was processed, edited and released to cinemas later in the day.

As the crowd awaited the arrival, Captain J.L. Findlay gave a polished display of aerobatics in Gloster Grebe NZ501. The Southern Cross landed into a brisk southerly and rumbled to a halt, to be surrounded by a cheering crowd which had broken through the police and army cordon and pursued the aircraft until it came to a halt.

Order was restored although not before some souvenir hunters had damaged the fabric. Squadron Leader Charles Kingsford Smith, co-pilot Flight Lieutenant Charles Ulm, navigator Harry Litchfield and wireless operator Tom McWilliams disembarked to be mobbed by the cheering, singing assemblage. 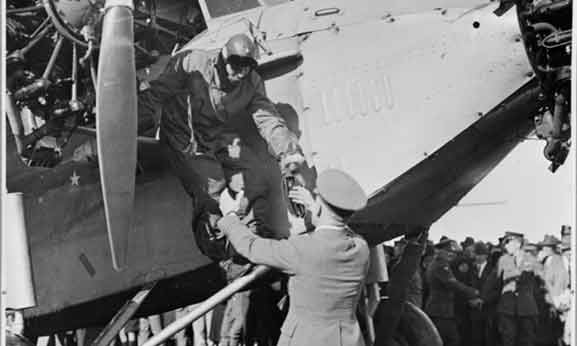 On hand to greet them was the deputy mayor of Christchurch, T.G. Sullivan MP, Sir Heaton Rhodes MLC representing the government, Major Tom Wilkes, Director of Air Services and Captain Findlay in his capacity as commanding officer of Wigram.

The crew were given silver ferns, one of which is held by the Air Force Museum of New Zealand, while in the melee, Kingsford Smith lost his flying helmet. 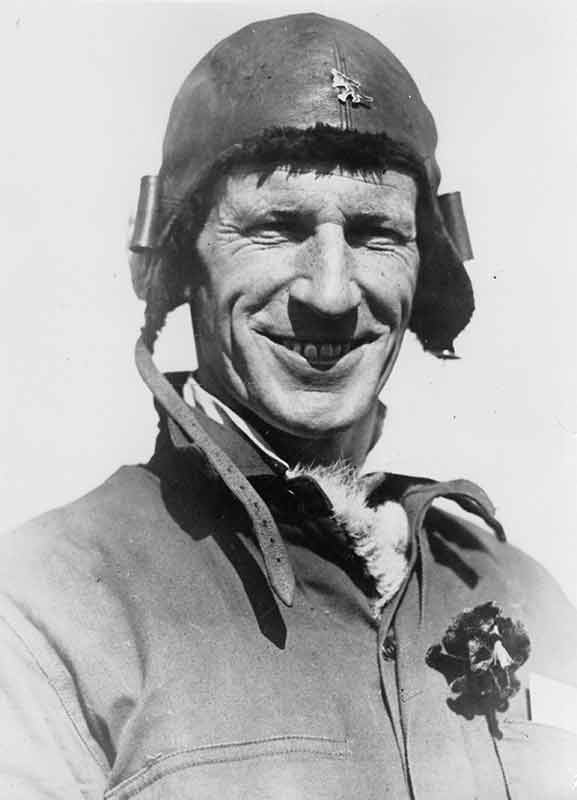 He said he didn’t want the helmet back but missed his black cat good luck emblem mounted on it. A small girl retrieved the helmet and it was returned to Kingsford Smith – who presented it to the youngster. Today it is preserved for posterity at the Air Force Museum.

Kingsford Smith’s New Zealand representative, P.R. Climie, had been hard at work and the day after the landing, the newspapers carried advertisements for a range of products, from motor spirits and lubricants to mattresses, all of which were endorsed by the gallant squadron leader – at a price.

In an extraordinary gesture which reflected the significance of the occasion, the government put three F2B Fighters, 6856, 6857 and the dual control 7120, at the disposal of Kingsford Smith and his crew to tour the Dominion. The Southern Cross remained at Wigram undergoing repairs and servicing after the Tasman flight.

All three propellers (made from the new US compound Micarta) were damaged and replacements were ordered from Sydney. The three Wright Whirlwinds had performed magnificently but were given top overhauls while the leading edge of the mainplane was repaired having been damaged by the battering from ice and rain in the violent electrical storm encountered halfway over the Tasman. 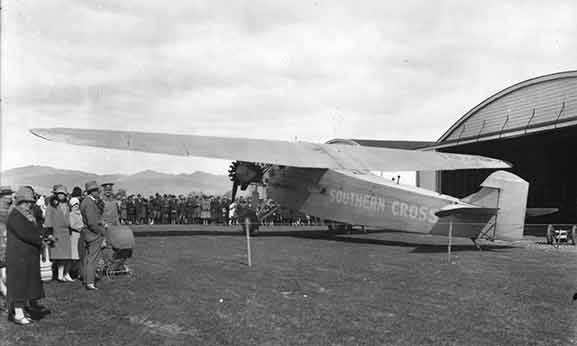 Safely behind a wire fence, the Southern Cross at Wigram shortly before it was placed in No 6 Hangar where repairs were completed. Its former US registration marks ‘1985’ are just visible on the starboard wing. Image credit: WgF4 © Air Force Museum of New Zealand.

The trio left Wigram on 14 September heading for Blenheim. Surging crowds delayed their departure by an hour. Kingsford Smith and Ulm flew 7120, Captain Findlay led the formation with McWilliams in the second seat while Captain Buckley flew Litchfield. Next day they flew on to Trentham, and a civic welcome was afforded at the Wellington Town Hall before what the newspapers described as an “Excited and wildly cheering” crowd.

Mayor G.A. Troup encouraged them to support proposals for a new aerodrome at Lyall Bay – which they duly did.

After Auckland and Rotorua, the party prepared for departure from Blenheim where George Fairhall had made land on his Marshlands property available. At Wigram the Southern Cross made its first flight on 27 September, its refit completed. At least two flights were made carrying guests and sightseers over the city.

On 28 September, Southern Cross left for Blenheim. The same day, Sir Henry Wigram dug the first shallow depression on the aerodrome’s landing area, ready to house a marble slab commemorating the historic first crossing of the Tasman. The slab became a feature of the airfield until it was retrieved and stored at the Air Force Museum prior to the land being developed for housing. 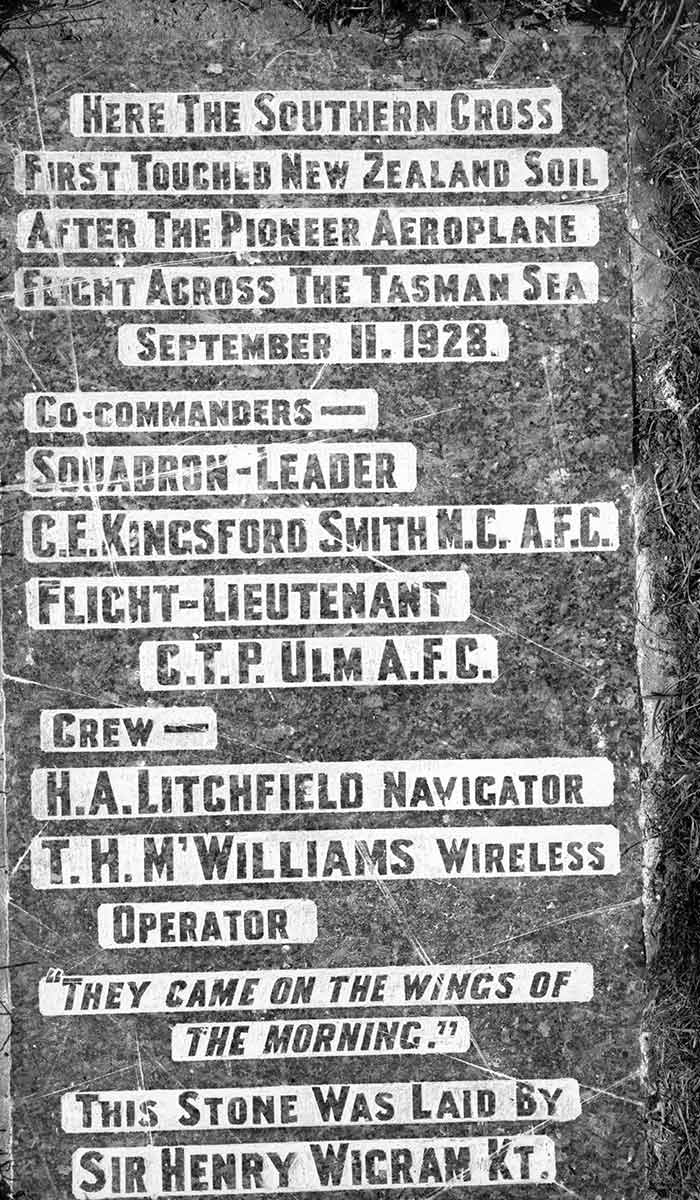 Indifferent weather forced several delays to the departure from Blenheim. The folk of Marlborough took full advantage of the situation, with crowds visiting the fenced-off ‘airfield’ while the crew were feted wherever they went and showered with gifts from around New Zealand.

At 3.30am on 13 October, Kingsford Smith and his crew rose, breakfasted and made their way to the airfield. Although the weather reports were not promising, he decided to go. The crew made a farewell radio broadcast and climbed aboard – Smithy and Ulm into the cockpit while Litchfield and McWilliams entered the rear of the cabin to their stations behind the large internal fuel tank. 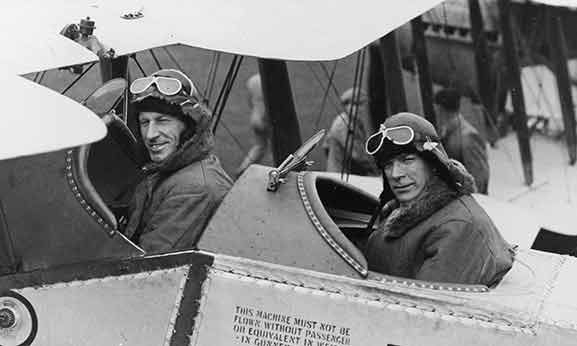 Kingsford Smith (left) and Ulm in the dual control F2B 7120. From the collection of the Air Force Museum of New Zealand. 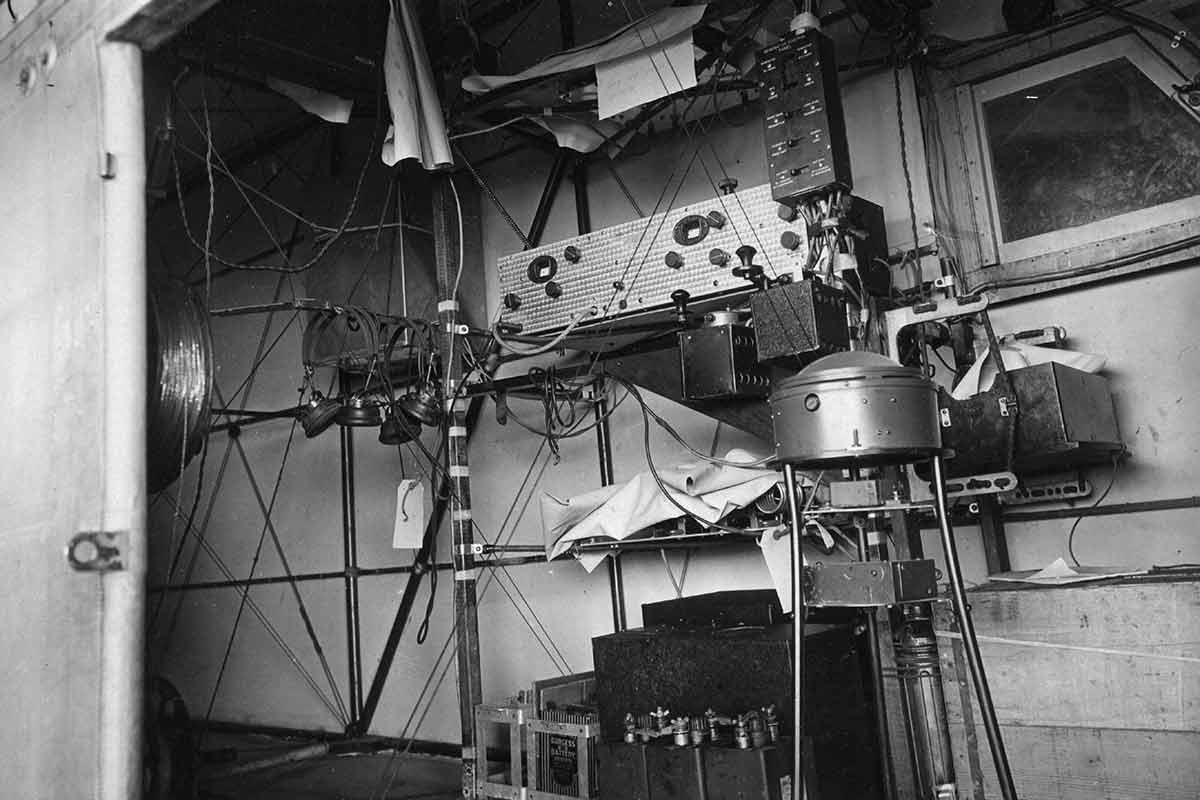 Nearly 5,000 people were on hand to watch the departure; cars lined the runway and the local power board had laid on electricity to illuminate the event. At 4.10am engines started. Southern Cross started taxying. Eleven minutes later, with two F2B Fighters flown by Captains Findlay and Buckley overhead, Kingsford Smith opened the throttles and the aircraft roared down the runway, lifting off after 594 metres.

The big Fokker circled the runway then headed west. For the first 160 kilometres, the two F2Bs provided company before turning back. Wireless operator McWilliams was able to work his transmitter and receiver – unlike the first flight when they were knocked out by lightning – and the world was able to follow the Southern Cross.  Flying into strong westerlies, they landed at Sydney at 1.42am on 14 October after a marathon 22hour 51minute flight. 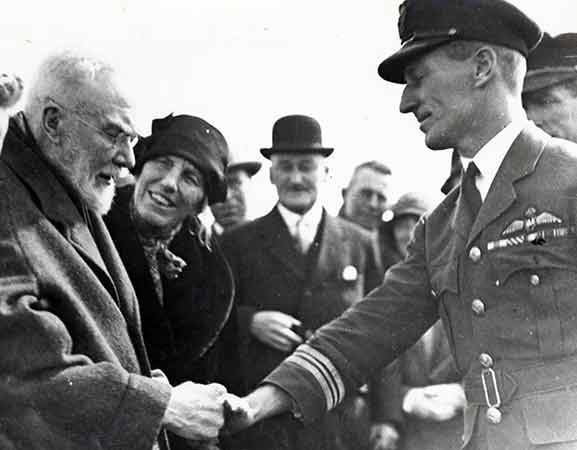 Footnote:  The crossings of the Tasman Sea by the Southern Cross have been exhaustively covered by the Aviation Historical Society, notably in journals of 1966, 1973, 1974, 1978 and 1979. Several books have also been published but by far the best account is in My Flying Life (Andrew Melrose, London, 1937) by Geoffrey Rawson with access to Kingsford Smith’s diaries and papers. Most other accounts draw heavily on this book.

This account has been written to mark the 90th anniversary of the first aerial crossing of the Tasman Sea.

Cuttings from various newspapers including the Evening Post, The Press, New Zealand Herald and Sydney Sun in Brian Lockstone’s collection along with various documents and photographs held by the Air Force Museum of New Zealand.

Have a look at TVNZ 1 video clip about the 90th anniversary of the first international flight landing in New Zealand! 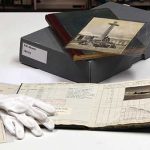 Brian Lockstone is a distinguished aviation author and researcher with a long career in the aviation industry. He is the President of the Aviation Historical Society of New Zealand and also editor of its Journal, The Aero Historian. Brian generously gives his time to the Air Force Museum of New Zealand as a volunteer, working alongside the Research Team in the archive.

Find out more about our reading room