Home / Within the Glass Case: The Red Baron

While curating our First World War centenary exhibition War in the Air: New Zealand in Military Aviation 1914-1918, we investigated some intriguing objects to include in the display. This blog, based on research by our Research and Curatorial Teams, explores the contested history of one such object: aircraft fragments from a very famous Fokker Dr.1 Triplane… 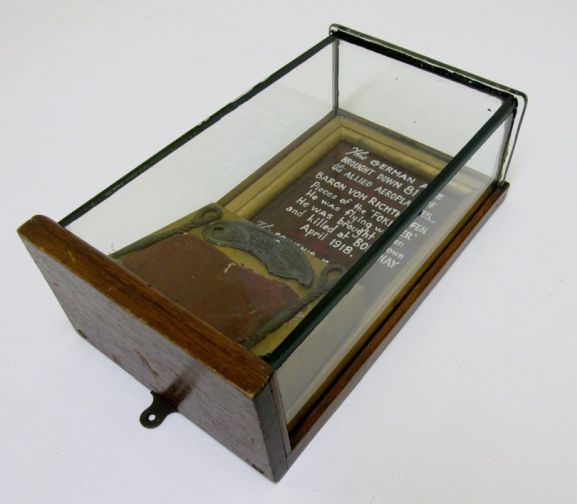 Aircraft fragments - Fokker Dr.1 Triplane. From the collection of the Air Force Museum of New Zealand.

‘This German ace brought down 81 [sic] of the Allied aeroplanes … Baron von Richthofen. Pieces of the “Fokker” he was flying when he was brought down at Bonnay April 1918. This souvenir is the property of Flight Lieutenant A.V. Barrow AFC’.

This inscription, written inside the object’s case, is key to understanding what these scraps of fabric and metal might be. So, who was this Baron von Richthofen and who was A.V. Barrow? Why and how did Barrow collect these souvenirs and what is their significance? 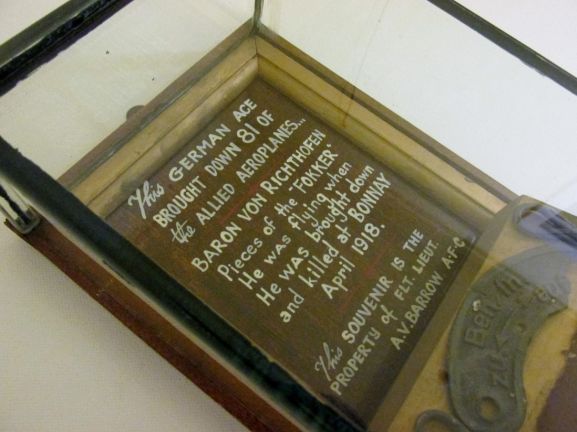 Inscription for aircraft fragments - Fokker Dr.1 Triplane. From the collection of the Air Force Museum of New Zealand.

Manfred von Richthofen, ‘The Red Baron’, was arguably the most famous fighter ace of the First World War. Born in 1892 to an aristocratic East Prussian family, Richthofen first joined the German Army as a cavalry officer, then transferred to the Imperial German Air Service, serving as a pilot against Russia. In mid-1916 he was recruited by the famous German flying ace Oswald Boelcke and joined the Royal Prussian Jagdstaffel 11 (No. 11 Fighter Squadron), commonly known as Jasta 11. Following Boelcke’s death in an accident later that year, Richthofen quickly became the unit’s leading fighter ace.

Through the use of advanced machinery (in the form of the Albatros D.III) and air combat tactics, by April 1917, Jasta 11 had gained total air superiority. Manfred von Richthofen was its top ace, having claimed a large proportion of the Squadron’s victories in what came to be known as ‘Bloody April’. 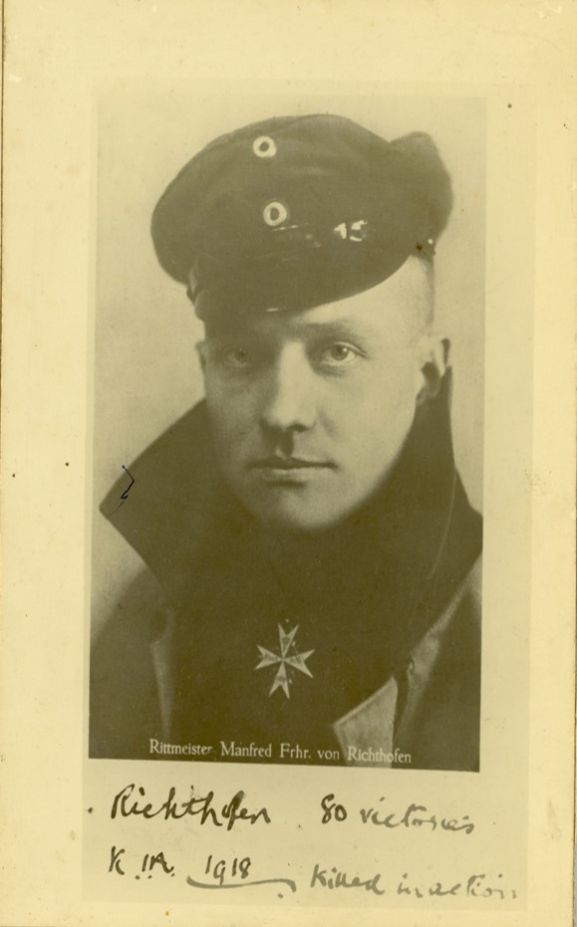 Mounted photograph – Portrait of Rittmeister Manfred von Richthofen, with Pour le Merite, taken from an original Willi Sanke postcard. Negative has been annotated below in the handwriting of Keith Logan Caldwell: "Richthofen 80 victories K.I.A. 1918. Killed in Action." From the collection of the Air Force Museum of New Zealand. 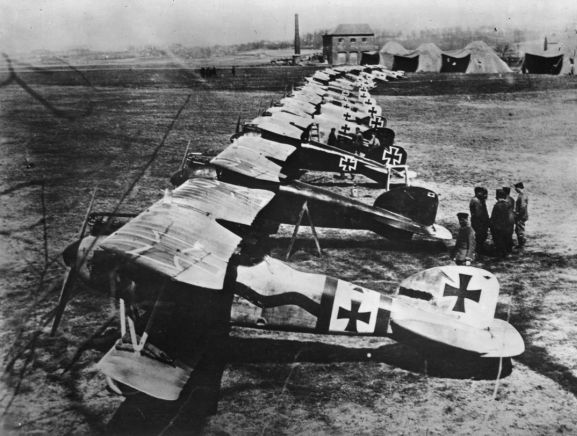 Copy print of a well-known photograph of a line-up of Albatros D.III fighters of Manfred von Richthofen's Jasta 11, at Douai, France during April 1917 (‘Bloody April’). Richthofen's aircraft is second in line. From the collection of the Air Force Museum of New Zealand.

On 6 July 1917, Richthofen was wounded by an air gunner whilst attacking No. 10 Squadron Royal Flying Corps (RFC). Despite requiring substantial rest and recuperation, he returned to duty against doctor’s orders on 25 July, but his serious head wound is believed by many to have caused lasting damage.

Although Richthofen later took convalescent leave from 5 September to 23 October, the question is still asked: was he the same, and did this impact his eventual death? Following his injury, he was known to have later suffered from post-flight nausea, headaches, and fluctuation in temperament. Nonetheless, by 21 April 1918, Richthofen had achieved a total of 80 aircraft shot down; these were mostly two-seaters, though none included New Zealand airmen. 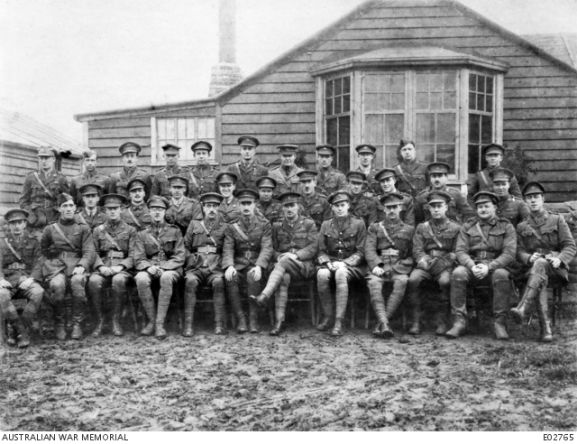 Group photograph of No. 3 Squadron, Australian Flying Corps, by unknown Australian Official Photographer, at Nord Pas de Calais, Nord, Bailleul, France, November 1917. Barrow is standing in the back row, third from left. From the collection of the Australian War Memorial [Public Domain].

At 10.45 a.m. while engaged on Photography we were attacked by two triplanes as above. One triplane dived on us and the Observer fired 120 rounds in bursts. One E.A. [enemy aircraft] appeared to separate from the others and might have gone down but the Pilot and Observer were too busily engaged with the other E.A. to watch him down. The other E.A. finally withdrew. [1] 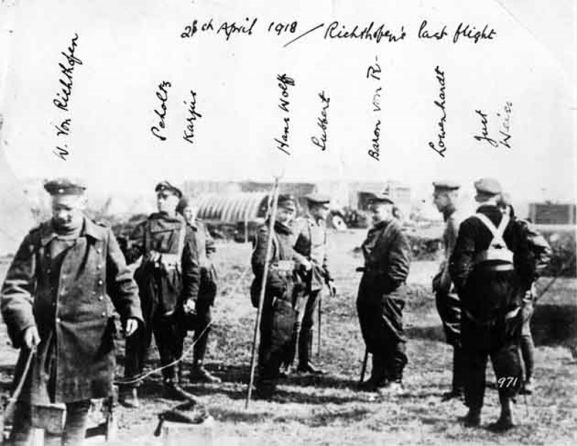 Richthofen and members of his unit before the Red Baron’s final flight on 21 April 1918. From the collection of the Air Force Museum of New Zealand.

Garrett later wrote home and described what happened that day:

Well, we got off all right and started to get height as quickly as possible, Duigan had bombs on and was about 1000 feet behind. We were about 7500 and had crossed and were taking photos when Barrow shouted out ‘Huns’. Of course I looked around at once and saw what looked like his circus nearly on us. Our scouts were well over his side of the lines and we could see them scrapping for all they knew, and apparently this Hun patrol broke away from the fight with intentions on us.

My first movement was to see how near to the other photographing machine, Simpson from Hamilton pilot [….] but found we were about half a mile apart. Duigan was about 1000 feet below, so I decided to join him for protection, knowing that Simpson could join us also. Before I got down to Duigan and I am afraid we went down very quickly, the two foremost were close upon us; they were triplanes and looked so [as depicted by small sketch] end on. They are his latest scouts, very fast and easily handled and of course very small with two machine guns firing through the propeller.

Barrow and I have practised for hours our system of defence, and he knew exactly what I would do. At about 100 yards he put a burst right into the leading machine, but he still kept on hoping that I would fly straight and so give him his chance, for in a two seater the observer can only fire so long as the target is not covered by the tail or wing of the machine.

During the scrap I only saw the one Hun machine; it was a gaudy red one, and seemed to be all over us at once, but Barrow was pouring in lead at 800 shots per minute, and apparently the Hun got fed up, for we last saw him in a funny roll, with Barrow firing for all he knew. Simpson was also attacked, but he also drove them away. Duigan fired when opportunity showed, but he was a little too low to be of help. [2]

Based on Garrett’s account, Barrow was one of the last men to see and fire at the great Manfred von Richthofen. Miraculously, both AFC R.E.8s survived the encounter and continued on their way, but Richthofen was not so fortunate.

The Royal Air Force (RAF) credited Canadian Captain Arthur ‘Roy’ Brown of No. 209 Squadron RAF with shooting the Red Baron down, but today it is generally agreed the fatal bullet came from anti-aircraft fire from Australian troops on the ground. 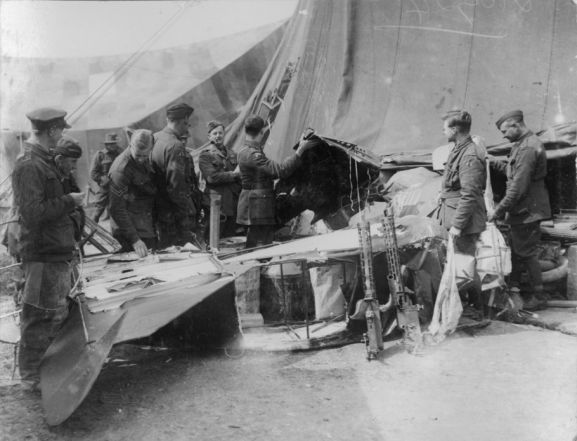 Copy print of a well-known photograph of airmen at Bertangles stripping the remains of Richthofen’s wrecked Fokker Dr.1 Triplane and his two Spandau machine-guns, 22 April 1918. Salvaged by No. 3 Squadron, Australian Flying Corps. From the collection of the Air Force Museum of New Zealand.

When Australian troops removed Richthofen’s body from the wreckage, the aircraft itself quickly became the prime target of countless souvenir hunters. It was in fact Barrow’s aerodrome that salvaged the triplane – this is almost certainly where he acquired the pieces.

Barrow, who was born in Harrogate in England on 3 July 1889, joined the Australian Imperial Force in 1914, first serving in the infantry. He then transferred to the AFC, was commissioned and became a pilot.

Later in life, Barrow moved to New Zealand and was a member of the Canterbury Brevet Club, to whom he gave his Richthofen relics. They were subsequently gifted to the Air Force Museum of New Zealand in 2000. 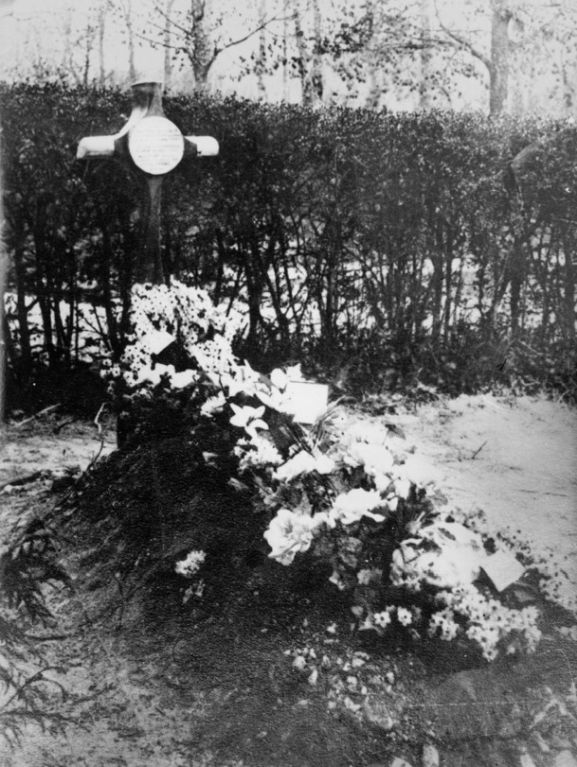 Copy print of a well-known original photograph of the grave of the Red Baron, Manfred von Richthofen, at Sailly le Sec, France, April 1918.  Grave is covered in wreaths and flowers. From the collection of the Air Force Museum of New Zealand. 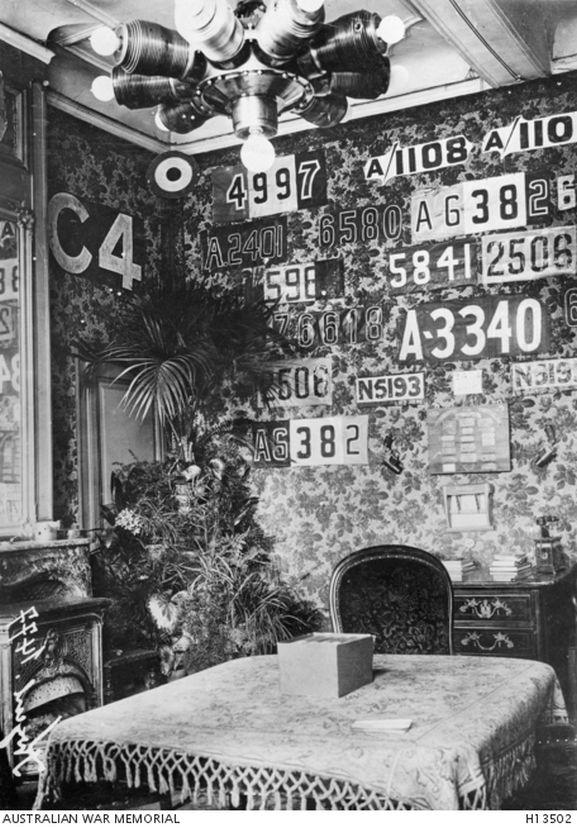 The Red Baron himself was a collector of souvenirs. Manfred von Richthofen’s room in the family home at Schweidnitz in Lower Silesia. Decorations include serial numbers cut from downed British aircraft and a chandelier made from a captured rotary engine. From the collection of the Australian War Memorial [Public Domain].

[2] Letter by Lieutenant Stanley George Garrett to his sisters Mabel and Edie Garrett, 25 April 1918, as cited in Veterans’ Affairs publication Vetaffairs: A newspaper for the ex-service community, November 1991, pp.10-11 (available online at the National Library of Australia’s Trove database)

Discover our War in the Air exhibition