Entry from the Aircraft Hall 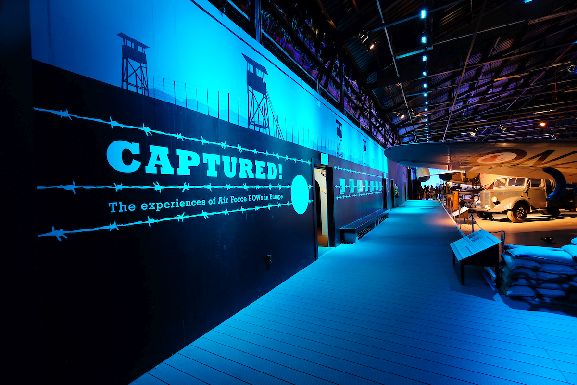 “For you the War is over” - Follow the journey of a prisoner of war in Europe.

This phrase, heard by the approximately 450 New Zealand airmen captured in German-occupied Europe during World War Two, marked the beginning of their new lives as Prisoners of War (POWs). This required adjusting to life ‘behind the wire’, surviving on limited rations, dealing with difficult living conditions and coping with boredom.

‘Captured!’ follows the journey of a POW in Europe, revealing what it was like to be shot down, captured, interrogated and imprisoned. It highlights the personal stories of New Zealand’s airmen who were POWs and gives an insight into everyday life in a POW camp, describing escape attempts, forced marches and eventual liberation.

This interactive exhibition will engage visitors of all ages. Make sure you bring your camera to take your very own POW mug shot!

Enter from the Aircraft Hall.

Please note that we are not currently taking group bookings.

Learn how you can use our public reading room to access the research collection.