It has been 50 years since the McDonnell Douglas A4-K Skyhawk, one of the most iconic and longest-serving aircraft in the history of the Royal New Zealand Air Force (RNZAF), first arrived in New Zealand.

The adoption of the Skyhawk by the RNZAF was the result of a protracted political and military discussion which was sometimes played out in the New Zealand media. By the mid-1960s, the Air Force was being re-equipped to meet the new and changing needs of modern warfare. Under Chief of Air Staff Air Vice-Marshal Ian Morrison, new American-made aircraft were introduced. The first helicopters entered service, in the form of the Bell 47G Sioux and UH-1D Iroquois. Transport flying was enhanced by the purchase of the Lockheed C-130H Hercules, while at sea, maritime strike and protection was modernised with the replacement of World War Two-era Short Sunderland MR.5 flying boats with the Lockheed P-3B Orion aircraft. These changes reflected the closer strategic relationship with the United States, as well as Australia, in the 1960s. 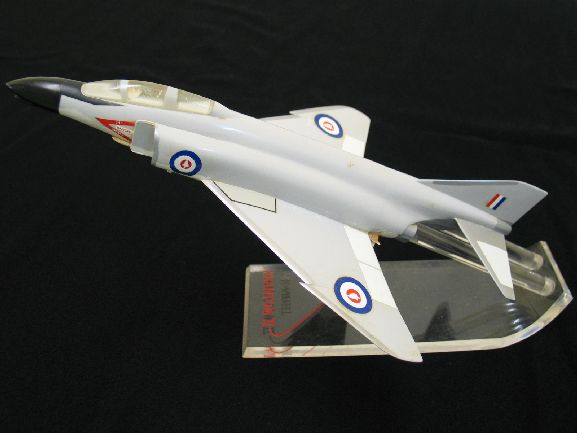 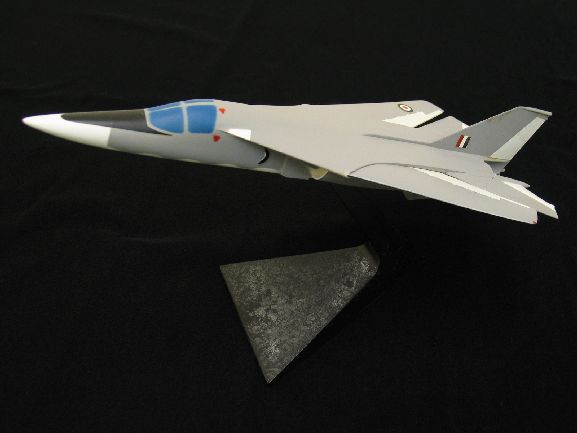 McDonnell Douglas F-4 Phantom (top) and General Dynamics F-111 (bottom) models on stands. These models, marked with RNZAF silver fern-type roundels, were presented to the RNZAF during the search for replacement attack aircraft in the 1960s. Models like this were often given by manufacturers to show the potential purchaser what the aircraft might look like in their service markings. From the collection of the Air Force Museum of New Zealand.

One area also in need of modernisation was the aging English Electric Canberra bomber fleet. In 1965, it was decided that two squadrons of modern attack aircraft could be sustained, and the search was on for a suitable candidate. There were several possible choices and different aircraft were favoured by different factions in the decision-making process. Air Vice-Marshal Morrison favoured the F-4 Phantom (but not before causing media confusion when he appeared to support the F-111); a team set up to assess the candidates concurred, as American Phantoms were proving their worth in the conflict in Vietnam. All of this discussion took place against a backdrop of needing to show allies (in particular the Unites States) that, in Morrison’s own words, New Zealand was ‘pulling its weight in quality’. 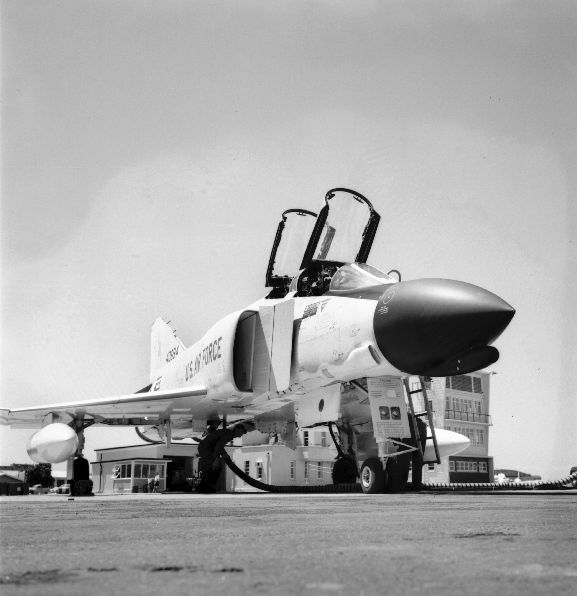 United States F-4 Phantom at Ohakea in 1966. These visits were good opportunities for the US manufacturers to ‘show off’ their hardware. Image reference: OhG7457-66 ©RNZAF Official.

The Decision is Made

The biggest problem was financial opposition from the Treasury, who favoured the cheaper Northrop F-5 Freedom Fighter in worsening economic conditions. The New Zealand military argued that modern combat capability was essential to the survival of the RNZAF as a capable force. 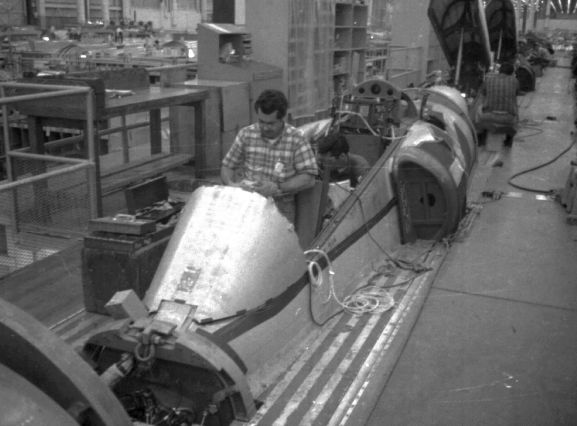 With a Military Sales Agreement with the USA close to ending, a reduced fund for purchasing ensured that there was no choice in the end. The McDonnell Douglas Skyhawk was about all that could be bought for the $15.2 million available. The Skyhawk had been in production in some form since 1954. A subsonic aircraft, it otherwise fitted the requirement. They were also serving well in an updated form in Vietnam. In 1968, a team travelled to the United States to inspect the aircraft and in June 1968, Cabinet approved the purchase of 14 of the 18 aircraft required – 10 single seat combat aircraft (A4K) and four two-seat trainers (TA-4K). 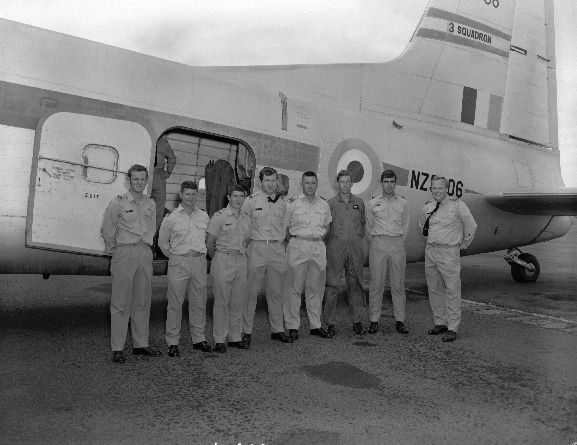 Group of first RNZAF pilots from No. 75 Squadron before leaving for the USA to convert to Skyhawks, 5 January 1970. Image reference: OhG2655-70 ©RNZAF Official 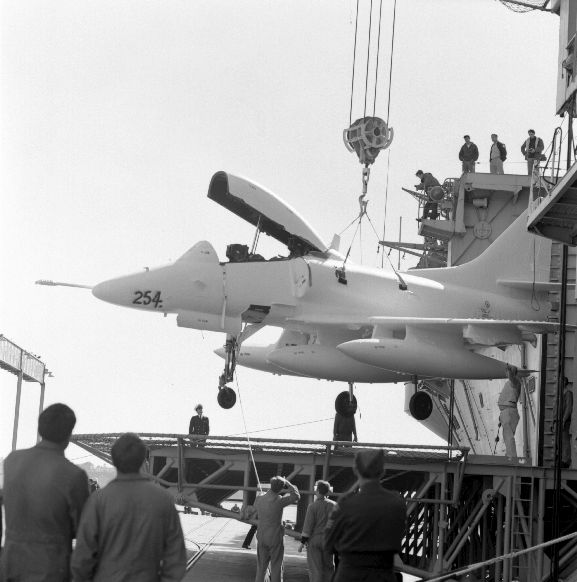 The delivery of the new Skyhawks. TA-4K NZ6254, being lowered from the USS Okinawa. Auckland. Image reference: WhG7844-70©RNZAF Official

On 1 May 1970, the USS Okinawa, a US Navy amphibious assault ship, set sail for Auckland with the whole RNZAF Skyhawk fleet on deck under weatherproof covers. The journey went well until a day out from Auckland. A stormy swell caused some anxious moments and a day’s delay, but the ship emerged from the storm with its cargo intact. At 9.30am on 17 May 1970, the Okinawa berthed in Auckland and the aircraft were unloaded. 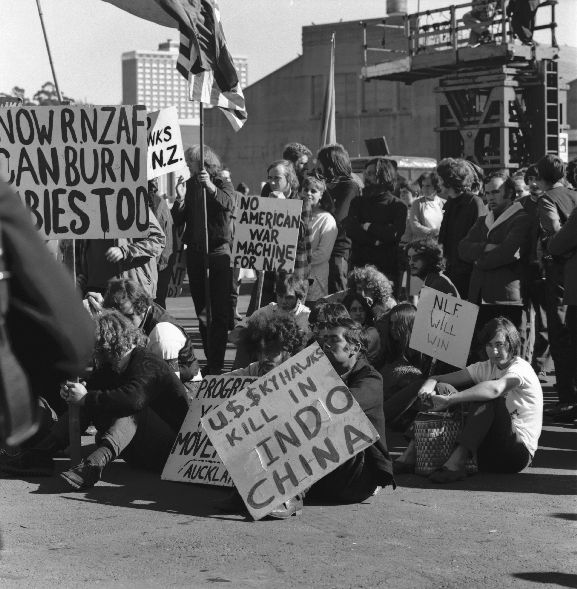 Group of protesters picketing the arrival of the new Skyhawk fleet in Auckland, 17 May 1970. Image reference: WhG8062-70 ©RNZAF Official

An anticipated anti-Vietnam War protest did materialise, but with reduced numbers due to the ship’s delayed arrival. Those who were there lined street corners with placards. Towing the aircraft to Whenuapai (RNZAF Base Auckland) by road was a slow and tricky process, with trolley bus overhead cables and various other obstacles on the roads, but by evening all the aircraft had arrived safely. 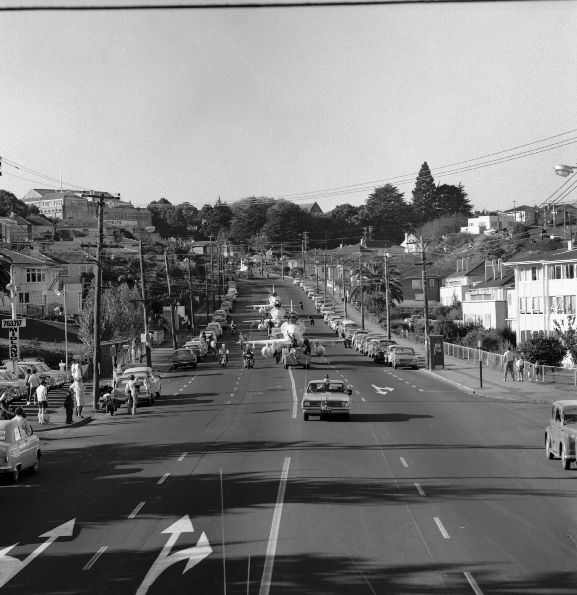 New Skyhawks being towed through Auckland streets on the way to Whenuapai, RNZAF Base Auckland. Image reference: WhG8057-70 ©RNZAF Official

Once at Whenuapai, all the aircraft were inspected and test flown, with the first being NZ6254 (now on display at the Air Force Museum of New Zealand) on 20 May. They were then flown down to RNZAF Base Ohakea, ready for service with No 75 Squadron. A new era in RNZAF history had begun. 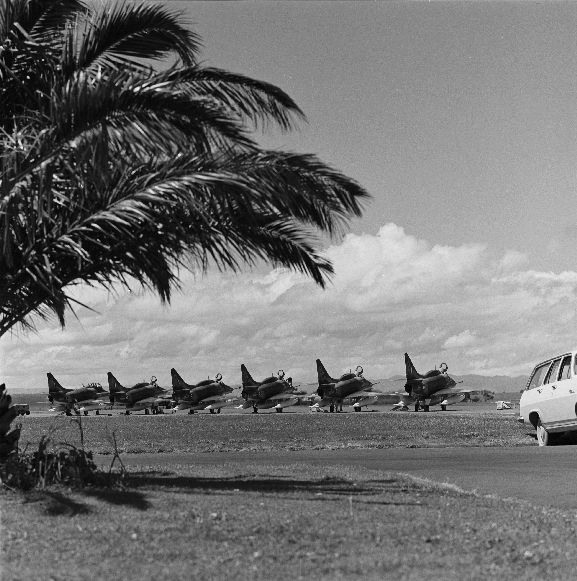 Stories of service and sacrifice