Among the personal collections of New Zealand airmen we’ve found the odd small trinket once thought to bring its owner good luck. This blog explores some examples from our collection and a few of the stranger tales of aviation superstition from World War Two.

This airman doll belonged to Kiwi pilot Flying Officer Jack Hoffeins. He carried it as a mascot and good-luck charm while on operations with No. 213 Squadron RAF in the Middle East and later, No. 267 Squadron over Italy, during World War Two.

With the War over, Jack embarked on one particular flight, and for reasons only known to him, he did not take his airman doll with him. 24 September 1945 marked the end of his run of good luck. He was flying 16 RNZAF servicemen home from active service in the New Hebrides (now Vanuatu), when radio contact with his aircraft was lost. No trace was ever found of the Dakota and its crew or passengers. The disappearance of Dakota NZ3526 remains the single greatest RNZAF loss of life in one day. 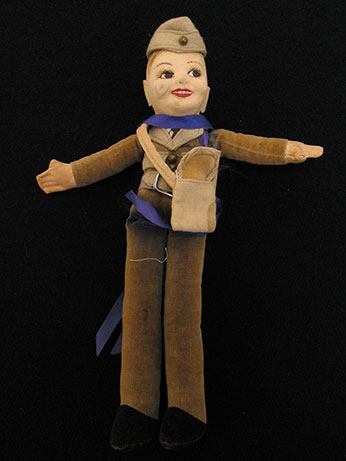 RAF airman doll carried as mascot and good luck charm by pilot Flying Officer Jack Hoffeins. Manufactured by Victoria Toy Works in Shrewsbury, England, the purple ribbon from Jack Hoffeins’ Memorial Cross was later added and tied around the doll. From the collection of the Air Force Museum of New Zealand.

Like Jack’s RAF airman doll, our Museum collection holds a number of objects kept by New Zealanders as talismans or lucky charms, and letters and memoirs describing their daily rituals for flying missions.

In a world where the randomness of death and injury in combat flying and low odds of survival were inescapable facts of life, young men faced their mortality on a daily basis.

Airmen developed ways to comprehend or avert the uncertainty of war, forming coping mechanisms to deal with the perilous work of wartime flying. Some turned to religion, others became fatalists. Still, many thousands of combat flyers observed a range of superstitious customs – from the traditional to the bizarre. 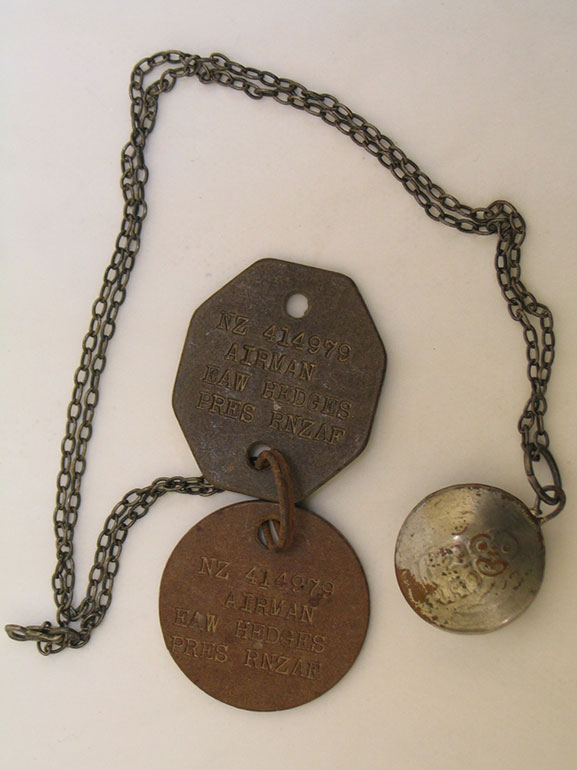 Identification tags with two half pennies, belonging to – Warrant Officer Ernest Hedges. From the collection of the Air Force Museum of New Zealand.

Lady Luck and her charms

The most common superstition was the belief that carrying a lucky charm or talisman would keep you safe from harm. Several good luck charms were objects that had been given to personnel by loved ones, others were handcrafted and traded. Some, like the identification tags belonging to Warrant Officer Ernest Hedges, were ordinary objects worn by airmen that had been modified to include a good luck charm – in Hedges’ case, made out of two half pennies. 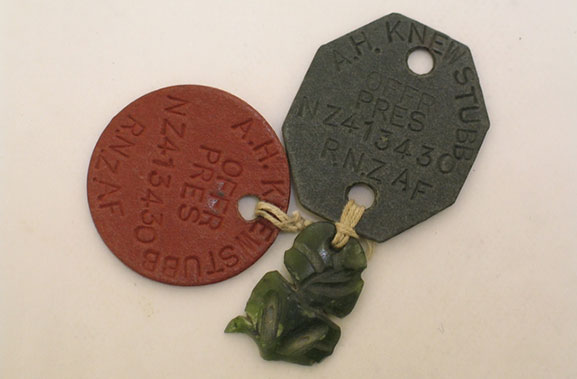 While Kiwi airmen adopted many of the same traditions as the RAF, New Zealanders, whether serving with the RAF or RNZAF, also incorporated unique ‘local’ features as symbols of good luck. Hei tiki (pendants in human form) were very popular among New Zealand airmen. Flying Officer Alfred Knewstubb’s own dog tags were adorned with a carved pounamu (greenstone) tiki.

Emblems originally intended to bring good luck could just as easily be thought to cause the opposite effect.

In keeping with his New Zealand roots, RAF fighter pilot Alan Deere had a Kiwi insignia painted on the side of his Spitfire. But at the recommendation of a fellow pilot, he reluctantly had this personal marking removed following a mid-air collision in January 1941. Deere records George’s comments in his autobiography, Nine Lives:

‘“There’s one thing you must do, and that is to do away with that Kiwi emblem on the side of your aircraft. It certainly doesn’t seem to have brought you any luck. Anyhow, the wretched bird can’t fly, and it seems all wrong to have it on an aircraft….” [1] 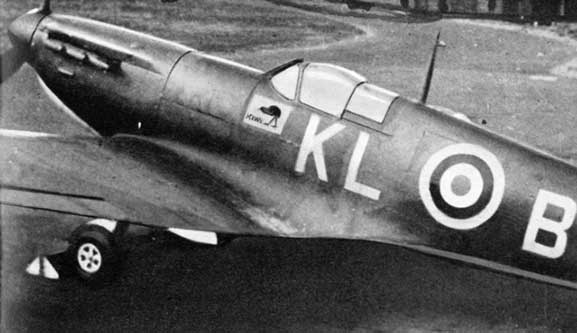 Diaries by New Zealanders also indicate how metaphysical notions shaped their war experience. Elfric James Insull (Jim), a navigator in RAF Bomber Command noted in May 1944, “Personally I feel quite flak-proof, but I do always take my pair of dice and my daughter’s wee bootie with me on every trip.” [2]

In his diary, Jim also tells the RAF tale of the “Chop Blonde”:

“The night before last, he [Birdie] and Frank took me to a small pub about two miles away on the other side of the [RAF Mildenhall] drome for beer and darts. The barmaid, they explained, is known as the Chop Blonde, it being alleged that she has been married dozens of times to air gunners, all of whom got the chop (were killed on operations). No one seems to know exactly how many husbands she has had, but I do not doubt the poor girl has married twice. Nevertheless, the myth of the Chop Blonde is firmly established, and it is considered very bad luck for a crew to possess a man who has been out with her.” (Tuesday 21 December 1943; pp.257-258) [3] 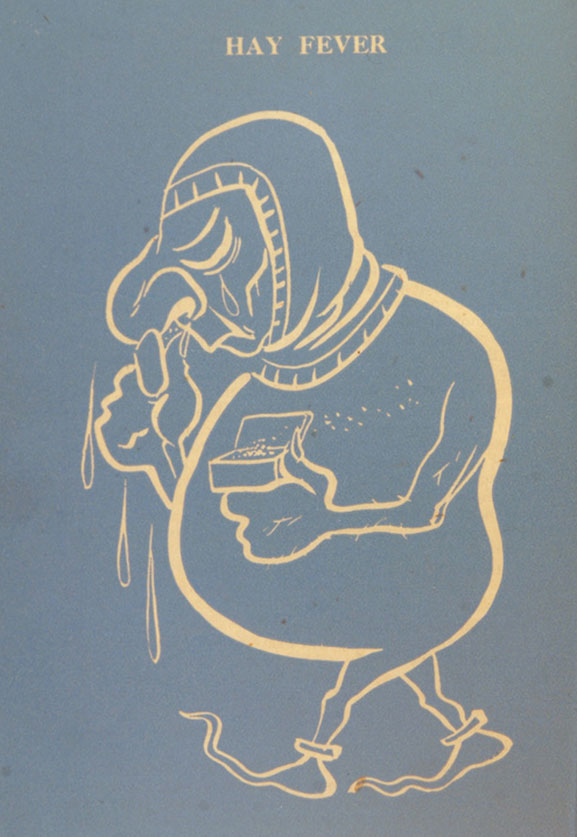 Hay Fever the Gremlin: ‘It is his job to see that you and I sneeze our heads off. We must watch our step … He’s a rare one for getting right inside your nose, is Hay.’ Ssh! Gremlins published in 1942, features several humorous illustrations by Ronald Niebour (“Neb” of the Daily Mail).

While there’s no evidence to say airmen actually believed gremlins existed, fighter pilots, bomber and ground crews alike spoke of these gnome-like imaginary creatures called gremlins. Instead of directing blame at one’s fellow crew members, gremlins were blamed for causing inexplicable mechanical problems and other general mishaps, and were used, particularly in the United States, as pin-ups for industrial safety campaigns.

According to S.P. MacKenzie, superstitious practices were highly common throughout the Allied aircrews. In fact, MacKenzie argues it was the feeling of agency and control these practices created which kept so many young men flying against the enemy despite the high risks they faced on operation. [4]

During wartime, superstitions were tolerated and even encouraged by those in command – a means of strengthening morale among flyers and ground crew alike.

Find out more about our collection