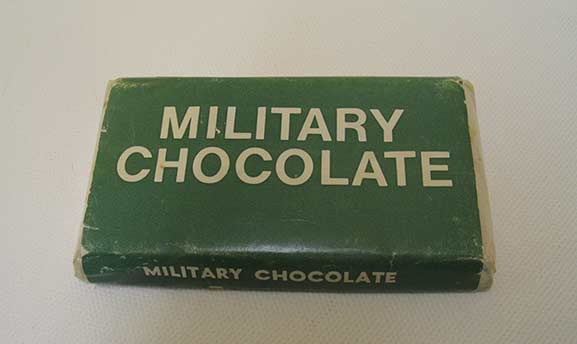 Rations – ‘Military Chocolate’. From the Collection of the Air Force Museum of New Zealand.

With fat and sugar delivering caloric clout, and cocoa solids bringing caffeine – and alertness - to the party, it’s no wonder that chocolate (or sometimes just cocoa) has long been a staple of military ration packs - including those enjoyed by serving members of the New Zealand Defence Force. The imaginatively-named bar of chocolate pictured above is not current issue for New Zealand personnel, but was produced for the New Zealand Army Department by Cadbury Fry Hudson Limited, of Dunedin. The picture makes the bar look deceptively large; in fact it’s about the same size as an average business card and weighs just over 55 grams - no family-sized block, but still enough for an energy boost.

Further associations of chocolate with home, comfort, and normality, also made it a natural fit in special gift packages. Chocolate was included in some versions of the Princess Mary Gift Fund tin, a morale-boosting item intended for distribution to all members of the British Empire Armed Forces serving at Christmas 1914. A Colonies Gift Tin - a similar item issued to British Troops serving in France at the same time - recently sold in England, complete with nine of the ten bars of Cadbury chocolate that it had originally contained. 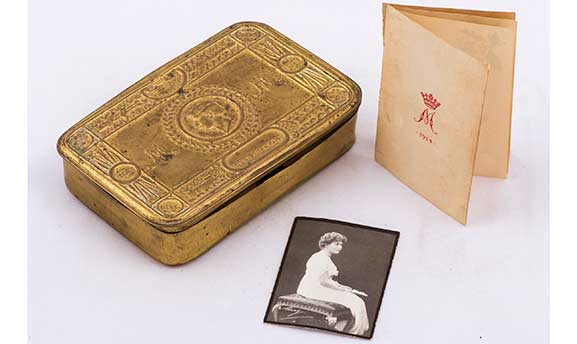 From the Collection of the Air Force Museum of New Zealand.

While far from fresh, century-old Cadbury bars may have been more appealing than American military chocolate. In 1937 the United States Army collaborated with the Hershey Corporation to develop a high-energy chocolate emergency ration bar that wouldn’t melt in warm conditions. The resulting ‘D Ration’, in production until 1943, was not designed to be a tasty snack for scoffing – in fact the Army Quartermaster stipulated that it should taste “a little better than a boiled potato”.  The chocolate, which was rock-solid and included oat flour amongst its ingredients, was almost universally unloved by troops, who dubbed it ‘Hitler’s secret weapon’.

Fortunately, from 1941, American soldiers had access to a chocolate product that they enjoyed. Now well-known and widely available, M&Ms were initially supplied only to the military. The confectionery’s candy-shell protected the chocolate inside from melting in warm conditions, and was itself a variant of a similar product eaten by troops in the Spanish Civil War.

While chocolate continues to feature in military ration packs, we occasionally see it represented in the Collection in a different way. Chocolate boxes, built to be sturdy, are often used by people to store personal items. A cardboard box, originally containing one pound of ‘Fortune’ assorted milk chocolates, latterly housed letters and telegrams belonging to Flight Sergeant Athol Benner Stace. Similarly, an impressive Aulsebrooks El Dorado box accompanied a recent donation to the Museum. Both manufacturers appear to subscribe to the Forrest Gump school of chocolate box packaging, giving no clues to the specific contents of each box. We can probably assume, however, that they aimed for a quality higher than ‘boiled potato’. 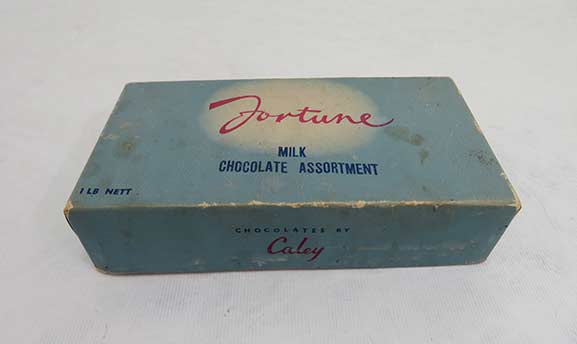 From the Collection of the Air Force Museum of New Zealand. 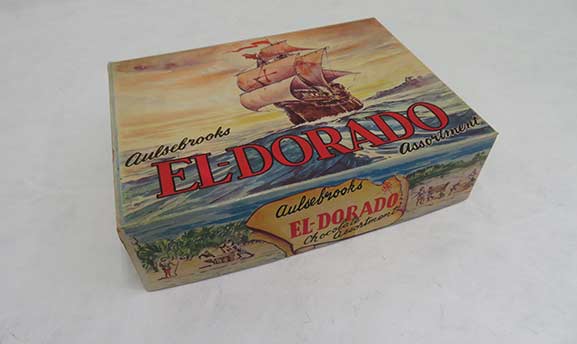 Find out more about our collection