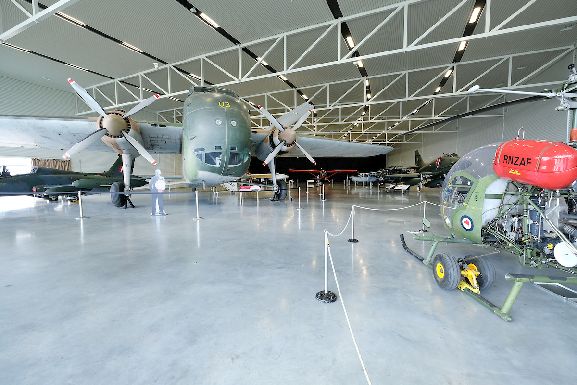 The Thérèse Angelo Wing (previously named the Conference and Events (C&E) Hall) is part of the Museum’s 6,500m² extension, completed in December 2012. Ultimately, this massive space will become a brand new display hall, but in the interim, it has been used for a number of earthquake recovery-related purposes, in the wake of the 2010/2011 Canterbury quakes.

In partnership with Vbase, the front portion of the building is currently being used as a temporary conference space pending the construction of a new central city convention centre which is planned to be completed in 2020.

In addition, until December 2015, it was used partly for storage and working space by heritage organisations whose collections were displaced following the Canterbury earthquakes (Canterbury Cultural Collections Recovery Centre ). The space which the Recovery Centre previously occupied is now home to our Reserve Collection.

There are currently no aircraft on permanent display, however, from time to time some may be moved back on temporary display during breaks in functions activity.

For information on hiring the Thérèse Angelo Wing for a function or event, click here.

Find out more about the facilities available during your visit.